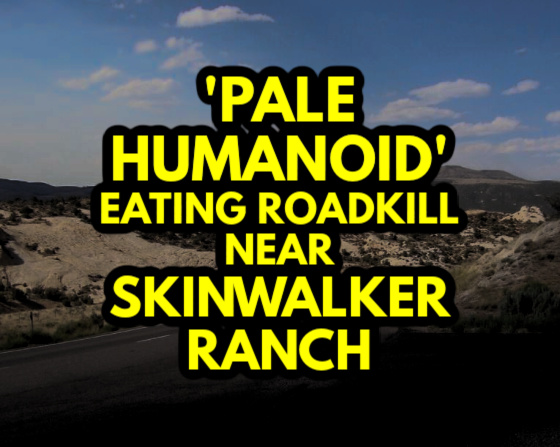 A tractor-trailer driver was on I-191, near the Skinwalker Ranch in Uintah County, Utah when he observed a pale humanoid crouched down and feeding on a dead coyote.

"My friend drove a tractor-trailer for a few years a while back. He told me he was driving a rig very late at night in northeast Utah, on a lesser-used two-lane highway. He said he remembers feeling very alert that night. So he noticed what appeared to be a figure manifesting up ahead on the dark road. He told me it wasn't on the road but just next to it. He then comes to a stop and grabs his heavy-duty flashlight and points it at the figure.

He then describes "it." This humanoid creature was feeding on a dead coyote while crouching. The truck had grabbed its attention and pissed it off. So it sort of stands up so he can get a full view of the truck. It was giant, pale, hairless, with very big eyes, and of course the coyote blood all over its face. Its height was over 6 foot, and it had skinny limbs, and no clothing. He then describes how it started to shuffle slowly towards the truck. Not only does he not have a weapon at that time. All he had was the long flashlight that he is using to view this creature. He decides to book it, hit the gas, and leave. He had no problem passing it. He looked in his mirror to see the creature standing in the middle of the road on two legs as he drove away.

When he reaches the nearest rest stop he sees two other truckers talking. My friend wasn't the only one to see the thing. Both the two guys looked as horrified as he was.

As for my opinion on my friend's encounter, I have to say, my friend isn't one to lie. So his story had me intrigued. I told him maybe what he saw was some mentally ill person out there. But he brushed the idea off saying he knew what he saw wasn't human. I'm not the superstitious type but his story did creep me out." SS

NOTE: The location, after making an inquiry, was along I-191, near the area known as the Skinwalker Ranch in Uintah County, Utah. Lon