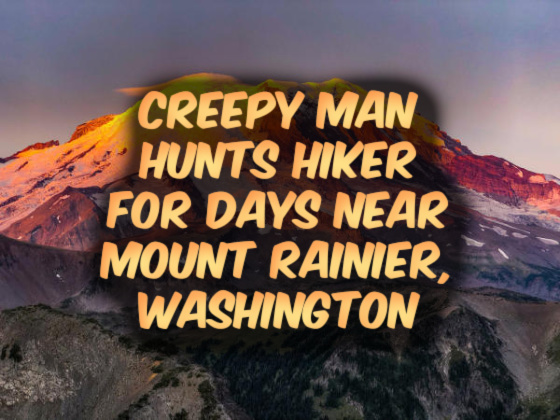 A hiker was in the wilderness near Mt. Rainer, Washington. That night, a stranger showed up at his campsite. For the next few days, this stranger literally 'hunts' the hiker for no known reason.

"I was camping in the middle of nowhere, back in 2017, in Washington near Mt. Rainer. This was not an official campground, just way out in the forest where I wouldn't have expected another human for miles. One night, I wake up and hear something, open my tent, and there is a guy sitting by where my fire had been right outside my tent. Nothing particularly noteworthy about the guy, just a fairly regular looking dude just sitting there a couple feet from my tent. No bag or pack or anything with him, just a guy. He saw me open the tent, his eyes got huge like he had just seen a ghost, and he took off. It shook me up pretty badly, but over the next day I managed to put it out of my mind fairly well. I just wrote it off as just some odd occurrence and a guy that was probably high or something and had somehow managed to set up a camp coincidentally not far from mine.

Then two days after that, and 10-15 miles away in totally random directions that nobody could take the same path, I was sitting by the fire that night and started hearing noises. I became more and more convinced there was a person around me. I called out to them and out of the darkness someone was like, "Do you know how to get to Bells Canyon?" I said no. I don't even think that's a real place there. They kept talking from just out of my line of vision. I tried to see them with my flashlight but they yelled, "Aim that away." I was kind of spooked and not wanting to piss off a potentially crazy person, I did.

After like 15 minutes of me being freaked out and them talking and asking completely random questions from the darkness, it sounded like the voice had gotten closer. I shined my light that way again, and it was the same dude who had been outside my tent two nights before. He had to have followed me almost 15 miles over two days because there is no way he could have just accidentally wound up in the same spot as vast as that wilderness is. No possible way. As soon as my light hit him he took off again. I started to chase him but didn't want to get lost in the wilderness in the dark, so I stopped quickly after probably only 100-200 feet. This one couldn't be written off, because the only way he could have been in both places is specifically if he was following me.

I decided the trip was over first thing in the morning and hiked back out over 3 days, constantly doubling back, trying to throw anyone following off my trail. Occasionally, I would hide and wait to see if he would come by following me. I really can't describe how terrifying it was to feel like I was being hunted through the woods, and to actually have to brainstorm on things I could do to best avoid potentially being murdered.

On the first night of hiking out, twice I heard what sounded like a person walking circles outside my tent. But by the time I mustered the courage to look nobody was there. On the second night I heard what I thought was an animal making noises in the distance, but I slowly decided it sounded more like a human making animal calls. It could have actually been an animal, but I didn't see the guy again. But it really sounded like a person making howling noises. I literally almost cried when I finally got back to by car. The relief was so strong.

To this day, it was probably the most terrifying experience I've ever had. I have no idea who the guy was or what his intentions were and no way of getting an explanation. But I really can't articulate just what a terrifying few days it was." VJ