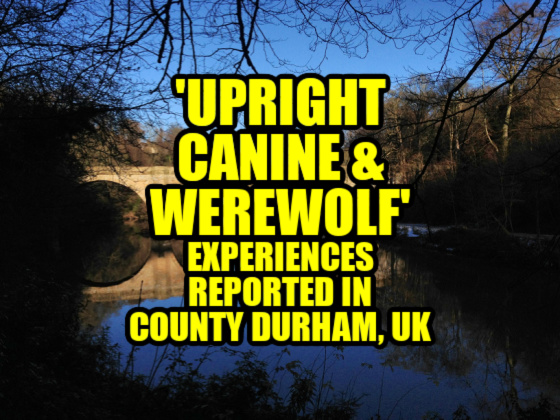 The following accounts were recently forwarded to me:

"I live in the City of Durham in North East England (County Durham). I often go walking with the dog in the early hours and have seen a couple of scary but interesting creatures in my travels. However, when I have told people about these incidents, they laugh at me.

The first incident: I was walking in passage way leading up to the cathedral. The dog stopped in her tracks and started growling. I got my torch from my coat pocket and put it on. I saw a dark, furry upright dog-like figure running at a fast speed away from me and it headed towards the river bank. I followed it down the passage on to the river banks and saw it run towards Prebends Bridge. It then ran up to the road where I heard a car slam its brakes and stop. I ran up to the road. No sign of the creature. The car's driver was shaken, as she said it ran at the car and jumped over it with ease and ran up towards Potters Bank area.

Incident 2: I was in a small wooded area known locally as Maiden Castle. I have noticed on numerous occasions, things like broken trees that couldn't be broken by a human being. Camp-like structures and sticks randomly placed in and on the ground. I was walking around the part of the wood that looks over the river with a good view of Pelaw Woods, Old Durham Farm and over towards Sherburn Bek and Sherburn House. As I walked, I checked my watch and it was about 3:35 am in June and was fairly light. The dog started barking and jumping about. At first I couldn't see anything as I looked around and then I heard a deep grunt and heavy footsteps. I then saw a large tree shaking as though it was very windy, but it was the only tree moving like this as the weather was mild and not windy. I couldn't see what was making the tree shake or make the grunts and footsteps even though they were getting closer. I ran and the dog followed me towards the old Whinny Hill School and back into built up area.

These events haven't put me off walking early in the morning like this. I am just more curious to what they are." Name withheld

There have been other cryptid canine sightings and encounters in County Durham, including the following:

The witness describes a childhood incident that involved her and her brother just before Christmas 1979.

The witness estimates she was around four-years-old at the time and her brother would have been seven. They lived in a two-bed roomed house in County Durham in North East, England. Peterlee was built in the late 1940s after the war for those who needed housing. This is her statement:

"I was about four years old when the most terrifying incident of my life occurred. I shared a bedroom with my brother at the time and he is three and a half years older than myself. On this particular night we were still awake in the very early hours.

We got out of our beds, switched on the light and stepped out onto the small landing in the dark. It was only when we reached the top of the stairs and were about to descend that we saw what was on its way up the stairs. At the bottom of the stairs with one foot on one stair and the other foot on the next stair and its left hand on the banister was a creature which could most aptly be described as a werewolf. It was the size of an average man or maybe taller and It was covered in dark fur and it had large slanted green eyes which seemed to glow. We both ran back to our room after standing paralysed by fear for what seemed like the longest time.

We huddled together screaming hysterically until we woke our parents up. Both of our parents made a tour of inspection of the whole house and reported that there was nothing there. Nothing was out of the ordinary and they saw no creature."

The brother remembers the creature's eyes were glowing red rather than green and he believes that the creature had either ears or horns on its head. He goes on to say in his account of the experience that there were stories at the same time of a werewolf seen by another child in the cellar of this home.