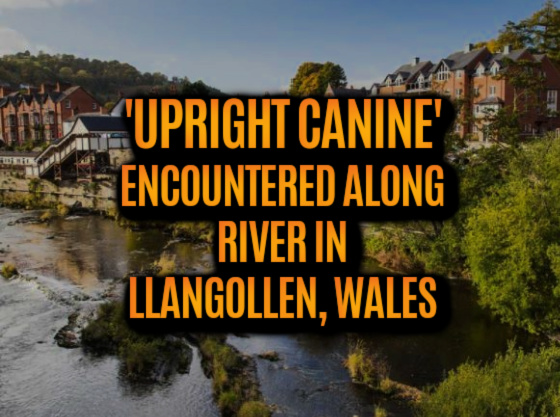 A resident of Llangollen, Denbighshire, Wales describes her various incidents around her home, that eventually led to a shocking encounter with a jet black upright canine along the River Dee.

"This occurred in 2019 near my home in northeast Wales next to the highlands near the town of Llangollen, Denbighshire. This was a new home for us. We are living in an old house that no one had lived in for over thirty years. It was built in between two old yew trees. We have four acres of woodland coppice behind the cottage that backs onto a wood that leads to the larger forest. When we moved in I started to explore the land beyond the garden and worked out where I was going to put the polytunnel. The plan was to create a forest garden and to clear space for things as its pretty wild and thick with bramble bushes and so forth.
As soon as I went up to the first level and looked to the left where its quiet heavily wooded and dark around a rhododendron bush, I felt immediately uneasy. This is odd for me because I love the woods and go out foraging regularly and have always felt at home out and about in wilderness.
A few days after clearing the space for the polytunnel we had a bonfire to get rid of all the brush. It was damp so the fire made a lot of smoke, until it eventually got going and burnt itself down. It was getting dark and I needed to put the tea on, so I left my partner to keep an eye on the fire and off I went. A good twenty minutes later, he came running into the house saying ‘something’ was sliding down the bank towards him but he couldn't see a thing. He could hear it and could tell it was getting nearer and nearer. He was really genuinely scared as he couldn't see anything.
The next thing that happened was when I was in the hazel coppice just chilling out watching the squirrels. All of a sudden there was a big 'whoooosh' next to me that came from behind me. It was as if something big had flown past my head and I could feel the wind on my face as it passed. I had really expected to see a buzzard fly down or perch in one of the trees, but there was nothing at all to be seen. That really was impossible because of where it would have had to fly to exit the wood. I would have seen it. It wasn't long after this that I finally saw the 'Creature.'
I was walking my dog in the late afternoon at the beginning of October 2019. I had decided to go down to the River Dee which has a small wooden bridge across. It is on an ancient pathway near a old church not far from our cottage. I got to where there is a big oak tree on the bank that looks down into a ravine which the river flows through and where the bridge is. That trail then leads off onto another pathway which takes you to an old farm. As I looked down towards the bridge I could see something ‘big and black’ moving down that path, running towards the bridge from the direction of the old farm.
I actually thought about the cows that roam free here and you know how they can be when dogs are around. But as ‘it’ got nearer it became clear to me that what I was looking at was jet black and resembled a giant wolf. But it was walking upright on two legs. It had big broad shoulders and arms and a thin waist compared to the rest of the body.
I cannot say that ‘it’ had canine legs or front facing knees but ‘it’ was definitely upright just like a human would be. ‘It’ stopped at the end of the path and was just stood looking towards the bridge. ‘Its’ chest was heaving like ‘it’ was heavily breathing, just waiting there until ‘it’ got ‘its’ breath back. For a few seconds, I just stared at it in disbelief and then all of a sudden it was gone.
A few weeks later I cleared a path near a fallen spruce that leads to a gate at the end of our wood. It wasn't too much work and after clearing brambles, bending and snapping a few branches out the way, it was done. The next day I went out to use the path I'd cleared and at the entrance to it there was a hazel branch that had been bent over and was being held down by a broken log literally blocking the path I had made. I went and got my partner and asked him what he thought because, to me, there was no way that could have happened on its own. He had to agree. I have not moved the log or used the path because I feel something doesn't want me going in that part of the wood for sure.
Last summer, before I saw the creature down near the bridge, I decided to get a dog from the local rescue. I took him up in the woods to explore and have a bit of fun playing with a stick. I didn't really know why, but he kept running off as if to chase something and I thought it was squirrels. When I caught up with him he would just stand barking, not at the tree, but at thin air. I thought this was very odd and day by day it got worse, as he would just stand near the house barking at the fence and gate that led to the wood. Sadly, he never settled and we had to find a quieter home for him. We do have a new dog and she too is experiencing things on the land and at home." Name Withheld
NOTE: This account was part of a series of cryptid canine reports I recently came across. This report, in particular, resonated with me and seemed factual. Lon