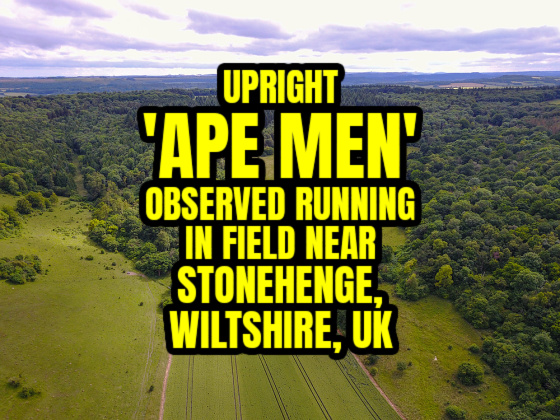 A woman and her mother were traveling through southern Wiltshire near Stonehenge. They stopped to take a break and observed 2 upright 'ape men' running in the field in front of them.

"I am reporting a strange incident from 2018 that happened very near Stonehenge on the Salisbury Plain in Wiltshire. I was later told that the area was east of Grovely Wood. My mother and I saw something moving across a clearing that we just can not explain. It was moving quite far away so I didn't get a close look at the face or anything. But you could tell it wasn't just two people moving at speed. I'm used to seeing cows and farm animals from far away, because there's animals everywhere in Salisbury. As you drive you get used to seeing animals or wildlife in the fields, but these were not cows or sheep. These 'figures' stood out as odd. There were two really big upright 'figures' in a far field that were striding along quite fast together. One was light brown in colour the other one was darker. They were moving at a fast pace away from us. We both were so shocked that we kept asking each other if we both definitely saw that.

At the time we were in the car driving back home on the A36 and I just wanted to stop and get out to have a cigarette. Mum decided to come out with me to stretch her legs and get some air, and we were just looking out into the countryside and talking when we saw these two huge 'figures' walk out in front of the bushes. If they hadn't moved we would never have seen them. They walked from behind the bush and were heading towards the next clump of trees. It felt like they were in our line of sight for a good minute or so before they moved behind another bush in the field and we couldn't see them again. We looked for a while but they didn't come back out or move this way. I know what people will say, but they were much bigger than any cow I have ever seen, let alone a human. Even from that distance you could see they were walking along at a fast pace, definitely standing upright on two legs. It was just crazy.

It was probably between 3 and 4 o'clock in the afternoon, so the light was good. It hadn't gone dark yet, during the end of February 2018. I've never really been into anything like this, but since I saw that, I just can't explain it, I really want to find out more to be honest. What are they? It looked like two 'Ape Man' type things. The Sasquatch picture I've seen looked pretty close to what I saw that day. But that's Impossible. Has anyone else seen anything like this in the area?

We were able to see them for quite a while. I didn't even think of my phone let alone feel compelled to take any pictures. It wasn't until after that I thought about that. Why didn't I take a video or picture? Which is strange because you would've thought if you saw something like that, you would immediately want to capture it? But I just didn't feel like that at all. We just watched them as they walked, waited a few minutes and got in the car and drove home. We did keep asking each other, "Did we really see that?" "What were they?" "How could we have seen them?" And I'm still wondering about that now.” Name withheld