Time Slips: '...the good thing is that you always return.' 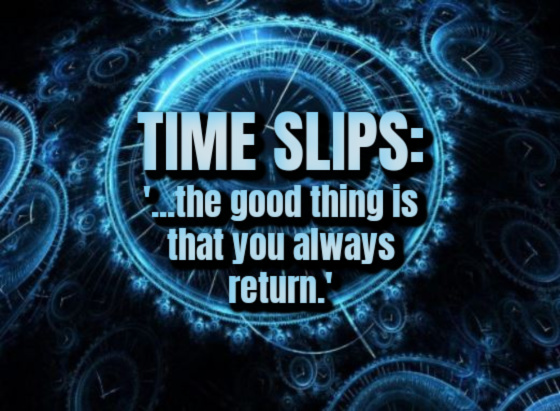 A British man describes a recent 'time slip' event at an international airport that left him questioning similar events that have occurred throughout his life. Have you had similar incidents?

"Myself and my two youngest kids were at the international airport (I assume it was at Heathrow. Lon) recently. We were catching a bucket flight to Paris. When the flight was announced it looked like the waiting area just emptied and headed down a passenger corridor including my two kids. As I started down the single long corridor, I realised I was well behind the group. At the end of the corridor, they all went downstairs. They had gone.

I felt lonely in this empty corridor but kept walking. Then I heard footsteps behind me. I thought I am not alone. I glanced to my right, and there was a man in a brown suit and shoes, wearing a 40’s style suit. I glanced to my left and saw a woman smartly dressed in black jacket, skirt and black half heel shoes, handbag with short black hair.

About 10 yards later I stopped hearing the man’s footsteps. So, I quickly looked to my right, but the man wasn’t there. I glanced to the left; the woman was still there. When we got to the stairs, I stopped to let the woman go first. But she wasn’t there, I looked back along the corridor there were no ramps off the corridor. Yes doors, but if they used one of them, they would have dropped 20+ feet.

Well, any crackpot could come up with this. However, this has happened to me since I was 7. Unusual, yes, but maybe not, I don’t know. I can enter a room and be in a completely different time and place. When they started happening, my mother said the good thing is that you always return. She wasn’t phased by it. She said she had seen a lot of comic book stuff in Germany in 1945." Regards, IN 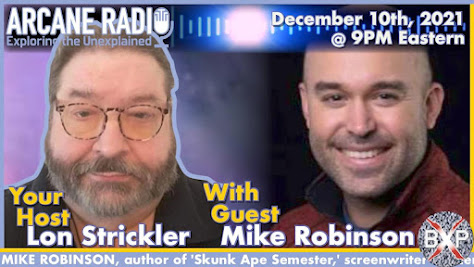 ARCANE RADIO | with guest MIKE ROBINSON, author of "Skunk Ape Semester"
This week, join your host LON STRICKLER for a special interview with guest MIKE ROBINSON!
It was at the tender age of 7 that an interconnection of cells and organs called Mike Robinson (then Mikey) penned, or penciled, his first story, The Aliens That Invaded My Backyard!. A runaway international bestseller, it went on to win the World Fantasy Award, Hugo Award, and was shortlisted for the Man Booker Prize. Or maybe those things were also just products of his imagination.
In weathering the pressure of following such an unlikely debut, he later became the author of multiple books: the trilogy The Enigma of Twilight Falls, The Prince of Earth, Dreamshores, Skunk Ape Semester, The Atheist, Dishonor Thy Father (with M.J. Richards), one collection of short fiction, Too Much Dark Matter, Too Little Gray, and more. Most tack toward the weird, the darkly fantastic, the metaphysical, the odd residue scraped from the bottom of our "souls" (he was a PhD in puns). And there's plenty more where that came from.
But the story buck doesn't stop there. A native of Los Angeles, his blood is half-celluloid, so it was inevitable that he also became a screenwriter and producer, not to mention co-editor of the magazine Literary Landscapes for the Greater Los Angeles Writers Society, or GLAWS, from 2011 to 2018. A short film he co-wrote, Chrysaline, debuted at the Louisiana International Film Festival in 2016, and his feature film, Corral, a psychological, supernatural thriller, is tumbling through post-production.
Author Mike Robinson has a .99 cent ebook / Kindle offer on 'Skunk Ape Semester' until the Arcane Radio interview on Friday. GRAB IT!
Join us this Friday, December 10th at 9PM ET / 6PM PT -  Watch LIVE w/ chat on the Beyond Explanation YouTube channel or at Beyond Explanation on Facebook
Listen to our podcasts at the 'Beyond Explanation' YouTube channel
-----

PURCHASE NOW!
**********
TODAY'S TOP LINKS
Bigfoot: Can the Hairy, Legendary Giants Read Our Minds?
When Monsters Need to be Invited: Avoid Them!
Could iron be the key to finding alien life on other worlds?
Creepy Doll-Filled Balcony in Caracas Looks Like the Set of a Horror Movie
Stonehenge to be Celebrated with 'Landmark' Exhibition at British Museum
ARCANE RADIO | A Tribute To Crypto-Investigator JC JOHNSON with SUMMER LOWRY & ERIC ALTMAN
The 'Unseen Ones' & 'Winged Ones' description & list will be continuously updated at Phantoms & Monsters & Phantoms & Monsters Fortean Research
Become An ARCANE RADIO Patron
CLAUDIA GRANGER'S EarthStar Talk YouTube Channel
Join CLAUDIA GRANGER'S EarthStar Talk Facebook Group - Ask Her Your Questions