The Slave Woman of Lake Marburg: My Personal Encounter 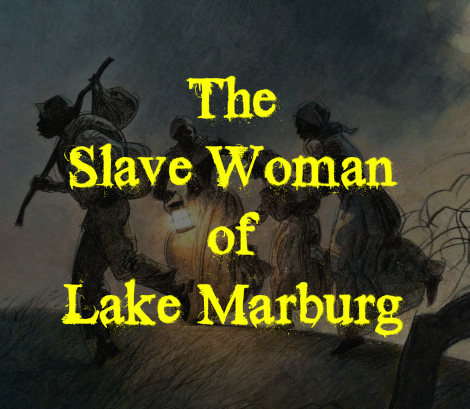 Someone recently asked me to tell them about my most frightening personal experience. There have been a few, but the following account occurred early in my stint as a paranormal investigator (I was 19 years old at the time). It was an encounter that almost put the brakes on what I was doing. I had come across a few apparitions previous to that day, but none have ever struck me as deep as the phantom I and 4 other men witnessed that day:

In the late winter of 1978, I was asked to explore an area of bottom woodland and marsh that was the property of the P.H. Glatfelter Company of Spring Grove, Pa. This property was below the Lake Marburg dam and bordered Codorus Creek on both sides. The nearest town is Porters Sideling, Pa. This particular area was very familiar to me, because many of my mother’s relatives had lived near there before the dam was built. As well, I had hunted deer in this general area since I was a boy.

The original report stated that the phenomena was of a woman’s screams that came from the hollow area, and always at night. Several of the Glatfelter employees had heard the sounds at various times over a 2-3 year period, starting in 1975. As well, a hunter (Bruce Rudisill) had also reported a strange blue fog coming from the marsh during a January 1976 morning at about 5:30 am, while he was sitting in a deer stand approximately 500 yards north. The hunter stated to me that he noticed (what he thought) was a deer running out of the marsh bottom and that he detected a bright blue fog hovering above the reeds and grasses where the deer had flushed.

I investigated the area of the screams and fog on February 22, 1978 beginning in mid-afternoon, and I was accompanied by a local friend, Rudisill and 2 Glatfelter employees (I was asked not to identify the 2 employees in my report). The weather was clear and very cold with little wind. We walked around the muck and thickets for a few hours. I estimate we covered 10 acres or so. I tried to pickup any sense of spirit or residual energy while walking, but was unsuccessful. It was approximately 6:00 pm by this time, so we decided to walk back to our car which was parked on a dam access road about 200 yards from the area of initial investigation. We got into the car and discussed some of the prior phenomena reported and tried to pinpoint a smaller area to closely examine.

At about 6:45 pm, while still seated in our vehicle and drinking coffee, my friend stated that someone was walking towards us on the access road. I looked up and noticed a dark figure walking slowly, about 40 yards from the car. I turned on the headlights and was amazed at what was before us. Though the figure was a bit shadowy, I could make out a young negro or mulatto woman in a long dark dress and a tattered blouse that barely covered her breasts. She was rocking her scarf covered head back and forth, and it seemed like she was talking to someone. She may have gotten as close as 20 feet from the car, but she suddenly turned around and disappeared.

I immediately got out of the car and looked around the area hoping to make sense of what we had witnessed. The others agreed to help me but, to be honest, they were in a state of panic, spending more time watching from the warmth of the car. After a half hour or so, I decided to call off further exploration that evening. On the way back to Spring Grove, no one said a word. To this day, none of the men with me that evening have ever contacted me (including my 'friend').

Over the years, I had returned to the area several times and did not witness any apparitions, but I did pick up a malevolent energy from a thick bough and the ground around an old oak tree in the marsh. The first thing that came to my mind was that something terrible had once occurred here.

After many years of investigating the history of the area and possible reasons for what we witnessed, my best conclusion is that this was the energy of a slave woman who was either captured by fugitive slave bounty hunters or was subjected to another horrible fate. The area is close to the Mason-Dixon line and the Underground Railroad out of the Maryland eastern shore and Baltimore that brought fleeing slaves into this vicinity. I am fairly confident that this was the result of what we witnessed.

Over the years since that incident, I have never witnessed an apparition quite as dramatic as the slave woman. I haven't been back for over 30 years, but I have been told that the area has had other unexplained anomalies reported since. None have been described as being similar to our experience, not to my knowledge. Lon