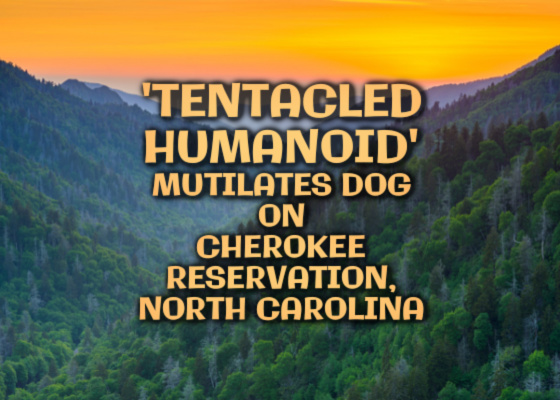 A Cherokee man in western North Carolina encounters a bizarre tentacled humanoid in the nearby woods. The being was mutilating a dog while the witness observed it.

"3 years ago, I encountered something in the mountains of western North Carolina. I was just wanting your opinion. I'm pretty shaken up and honestly I don't know how to describe what happened or what I just saw. I swear this story is entirely truthful and, to be honest, I'm kind of hoping you can help me make sense of this in a way that doesn't equal monster in the woods.
Some context, I live in a small community in the Smoky Mountains. I am a member of and live on the Eastern Band of Cherokee reservation. I'm 22, live with my 22 year old wife, with our soon to be 3-year-old son.
One evening, my cat is outside and I tried to call him in because some neighborhood dogs, that are basically nothing but pests, chase him off. These dogs do nothing but kill pets, spread trash throughout the entire neighborhood, and attack people. I chase the dogs off, but my cat took off deep into the woods. We recently lost our other cat to these dogs, so now I'm worried they'll be back and get ahold of my cat.
I know my way around the woods so I grab a machete, flashlight, and head into the woods. Nothing really happens until I hear those dogs further in chasing something. I run towards it worried I'm about to find them ripping my cat apart. As I'm getting closer I realize the sounds of distress I'm hearing aren't a cat, but that of a dog. I quickly flip off my light and get low. I move closer quietly to see what's going on. Now keep in mind it was, of course, dark but I swear to God that before my eyes was a very thin humanoid creature reminiscent of Pumpkin Head from those old horror movies. There was something like tentacles and this thing was using its hands and tentacles to just tear into this poor dog. The entire time it was making this noise like a creaking door.
I crept away as far as I could, threw up, then ran home. I locked up the house, came to the bedroom where my son and wife are sleeping, watched the doors until the sun came up and wrote this. What do you think I encountered?" MP
NOTE: I have family who lived near the Eastern Band of Cherokee reservation for many generations, but I have never heard a description of anything matching this one. Lon

PURCHASE NOW!
**********
TODAY'S TOP LINKS
Georgia Skunk Ape Reportedly Captured on Video — Is It Real?
Enormous fish 'like half a mutilated shark' could beat world record with giant size
Chinese Military Has Its Own UFO Task Force: It’s Been ‘Overwhelmed’ By Surge In Sighting Reports
The Loch Ness Monsters and the Technology of Sonar
Not Quite “The Walking Dead,” But Getting Close: Cannibals on the Rampage
ARCANE RADIO | with guest MIKE ROBINSON, author of "Skunk Ape Semester"
Become An ARCANE RADIO Patron
CLAUDIA GRANGER'S EarthStar Talk YouTube Channel
Join CLAUDIA GRANGER'S EarthStar Talk Facebook Group - Ask Her Your Questions