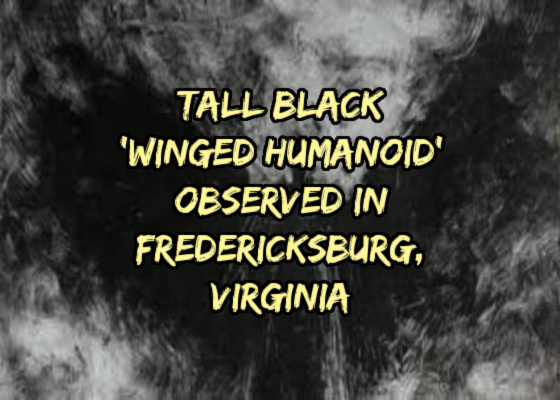 A Fredericksburg, Virginia man observes a 8-9 foot tall black winged humanoid that was perched and then jettisoned upward from the top of a neighbor's utility shed.

"Hello, I thought I’d finally share my husband's encounter in 2019 in Fredericksburg, Virginia.  We live in Florida now but are moving back to Virginia. It was probably March of 2019 and we had just had a baby, so she would wake up every couple hours and my husband and I would take turns getting up with her.

It was around 5 am in the morning when he got up with her and after laying her back down he went on the back second story balcony to smoke a cigarette. He said it was bright out, so much so that he thought the downstairs outdoor light was on. He went to the edge of the deck to look down at the light but it was off and realized it was a full moon. When he looked up he was facing our neighbor's back yard. He noticed on the shed a dark figure perched on it. The figure was highlighted by the moon but absorbing the light. It was completely black with no defining muscular form. He barely saw it and it immediately launched straight up in the sky not spreading its wings until it was very high up and darted over the trees and out of sight." ST

I asked for additional information from the witness and received the following:

"The only other details he can remember is how black it was. He said it’s the darkest black he’s ever seen. Also, that it is was very tall, 8 or 9 feet. He didn’t see the eyes. He ran inside as soon as he saw what it was. He stuck his head out of the door once he got inside and it was already in the air. Thank you, ST"