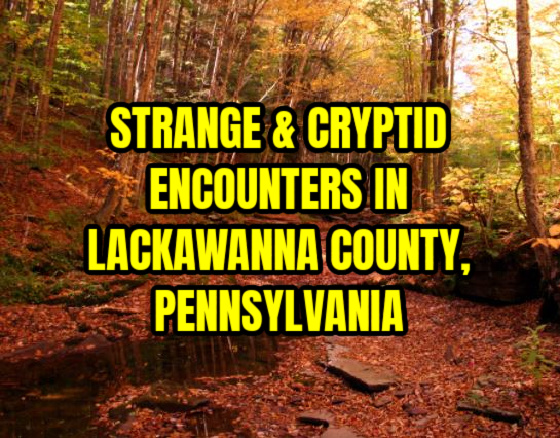 A Lackawanna County, Pennsylvania resident describes several strange & cryptid encounters he and his wife have experienced since moving from New York City 5 years ago.

"My wife & I have lived in Pennsylvania for a little over 5 years and have had a few unexplained encounters in that time.
We moved to Carbondale (Lackawanna County - about 20 minutes from Scranton) from NYC where the strangest thing we saw there was a raccoon or owl, seriously, no wildlife except for pigeons, seagulls and rats.  Since we've moved out here, there have been 5 encounters. 3 canine-esque and two skin-walker/flesh pedestrian. FYI we live in town, not the boonies
For the non-canine encounters, they were "mundane" as far as their cryptid type goes.
(1) One night my wife & I were on the front porch having a cigarette after dark and I heard something coming through a narrow patch of brush across the street, it's pitch black there, street lights were on but it was in the dead zone between them & this "person" walked through dense brush/trees like it was wearing NVG. "They" appeared relatively tall 6'+ and twiggy-like meth head twiggy. It just sauntered out of the brush and down the block following the darkness between street lights.
(2) I was walking my pup one random night and out of the corner of my eye there was a tall being next to a tree a few doors down from me. I went to do a double take and it was gone.  Just like the 1st encounter, it was in the dark zone.
For the canine encounters they're a little more intriguing, to me at least.
(1) This one might have been a legit canine but I can't confirm. My wife & I were hiking in Merli Sarnoski Park off of the main trail and we came face to snout with a not so happy beast. I heard growling and stopped so I could try and see what we pissed off. Less than 50 yards in front of us was a dark gray almost black wolf, not a damn coyote, carrying a red fox in it's mouth for a nice little lunch. I grabbed my pistol and basically pushed my wife back down the trail in the direction we came. It chose not to pursue us thank God. I say this might have been a real canine since I wouldn't be surprised if there were real wolves out here.
(2)  A little less than a year ago my wife & I were dead asleep, puppy was sleeping between my feet & we were all woken up by the sound of a wolf (too deep/masculine to be a yote)howling right outside of our window.  Mind you-we're on the 2nd floor & there's nothing close enough to the house to make it an easy jump.  Needless to say we had trouble falling asleep after that.
(3) Less than a month ago my wife & I were again on the porch having a cigarette and we heard something heavy walking across the awning above us-the same awning that's right in front of our bedroom window.  We sat out there and waited for a while to see if this thing jumped down or did anything.  I did a quick recon around the front of the house to see if there were eyes or tracks and I couldn't find a damned thing
I unfortunately do not have any supporting evidence for these but I am a straight shooter & an outdoorsman. I'm pretty good at recognizing animals, I've encountered quite a few while out hunting the last  few years & I'm not one to B.S or pad facts. I'd like answers but I' pretty damn sure I'll never get a definitive one. Whether real or cryptid they're elusive & stealthy so the chance of getting anything on camera is slim to none." MB
NOTE: Yeah, well welcome to Pennsylvania! Lon