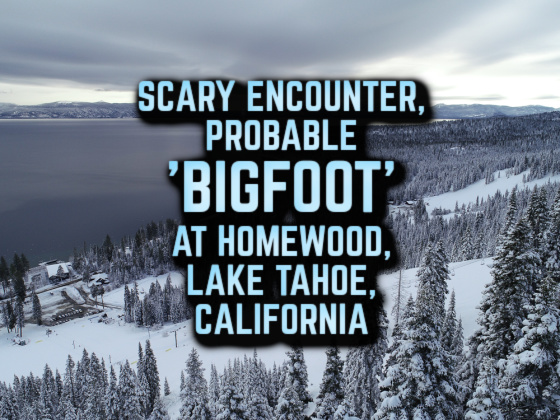 A witness reports a frightening incident that he had while visiting at Homewood, Lake Tahoe, California in 1962. The encounter was probably with a Bigfoot, which are regularly seen in the area.

"In March of 1962 I was invited to spend the Easter week at my friend’s cabin in Homewood, Lake Tahoe, California. I was 15, full of energy, and fearless. There was probably four feet of snow in the hills surrounding the lake and my friend’s dad had to pay to have the road to the cabin plowed free of snow. The cabin was probably more than a mile above the lake and was the last cabin on the road.

About the third day there, my friend’s family drove to Sparks, Nevada to pickup their grandma.  There was no room in the station wagon for me to accompany them so I stayed at the cabin.

The snow behind the cabin had been trampled down by me, my friend, and his sister as we tried to ride a sled and just played in the snow. I had my friend Roy’s pump Benjamin pellet pistol and shot several pine cones from nearby trees. This was about 10 am in the morning and I went to the outhouse to do my constitutional.

Sitting in the outhouse I distinctly heard loud bipedal steps coming out of the surrounding woods toward the outhouse. The frozen snow crackled with each step. I began pumping the Benjamin fiercely, getting in over 20 pumps. The steps sounded like they were within 20 feet when I loudly and plainly spoke, “I have a gun and I am not afraid to use it!” I sat on the toilet for several more minutes before opening the outhouse door.

I looked around and saw no one. I tried to look for prints but we had made so many that nothing new could be isolated. There were no other residents in the area for several miles and I knew something strange had occurred. At the time I thought it was an intruder thinking he could rob the cabin. However, he came out of the forest above the cabin and not from a lower location in the direction of the highway around Lake Tahoe.

My friend became a Major League baseball player and is the answer to a trivia question which occasionally is brought up. He now has Alzheimer’s but over the years we would marvel over the strange incident which was the scariest moment of my life." EG

NOTE: Most likely a Bigfoot encounter. Lake Tahoe residents and visitors regularly report activity, especially when then is snow. Here's a December 2020 sighting from the area. Lon