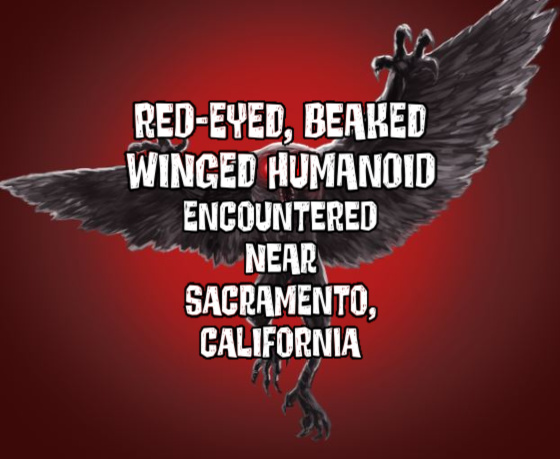 A northern California man described an encounter that he and others had with a 8-9 feet tall red-eyed & beaked winged humanoid while driving at night near Sacramento.

"I live in northern California in a smallish town outside of Sacramento. This event happened sometime in the winter of 2015. I don't remember the exact date, I just remember it was cold outside. Anyways, I was over at my friend's house who was throwing a small kickback that day and I was helping prepare. Two of my other friends caught a ride on the way to the party but they needed a ride back afterward and I told them I was DD (Designated Driver) tonight and told them not to worry as I would give them a ride home after the party ended.

Fast forward towards the end of the night, it was around 12:00 -1:00 am at this time. Let me just clarify that I was not tired nor was I inebriated. We just got done partying and whatnot so I was still very well awake. My friends wanted to go home, so I went and started the car and at the time I had a girlfriend so she was sitting in the front passenger seat and my two friends were sitting in the back. We hit the road and started driving.

I decided I was going to take some back roads that lead to the freeway, my friends lived a town away up the hill. The whole time we were on the road we did not see one car, which was a bit strange as there are usually at least a couple on road, from people working night shifts and whatnot. I didn't think too much of it.

We reached a stoplight that leads down the main street through my town that would take us to the freeway. On this road, there is an airport for small planes and then there is a convenience store. Other than that it's just trees and some houses here and there. I was driving down the relatively straight road so I could see a fairly long distance in front of me.

As I came over a little hump in the road I could see there was something in the middle of the road, about a quarter to a half-mile away. The object was a pretty good size. From a distance it looked like a grey tarp or a big plastic bag lying in the road. I just thought maybe someone lost it while hauling it on a trailer or something, but there was room on the shoulder for me to go around so I wasn't too worried.

At this time I was approaching the object, which was on my side of the car and I was going maybe 25mph just to be cautious as I passed it. I was about 15 to 20 feet away from this thing about to pass it and this is when the most unexplainable thing happens. This thing, that I thought was an inanimate object, GETS UP, and I mean gets up quickly. From what I could see it was standing 8 to 9 feet tall, it then spreads its wings that were at least 15 - 20 feet wingspan. It then flies right over the hood of my car, I'm talking like 2 feet above and I can see this thing clear as day. Its head then turns to me as it's about to fly out of my line of sight, and what I saw still haunts me. This thing makes direct eye contact with me and its face was human-like. It had bright red eyes and some weird beak for a mouth, almost like an owl or a moth.

That's when my brain realized what was happening and my first instinct was to slam on my breaks. We came to a halting stop and I was looking through my rear window trying to find this thing. My girlfriend and both of my friends in the back then start yelling and told me to go frantically. I hauled ass out of there. My girlfriend and both friends were both yelling 'what was that!?' To this day I have no idea what we saw. I'm not sure if this is considered a "glitch" but what I saw did not belong here. I asked my girlfriend and both friends what it looked like and they described exactly what I saw.

We did not sleep well that night. You don't have to believe me as most people don't, but I just figured I would share." G

-----
Hey folks...I'm putting out an 'open call' to graphic artists who would like to participate in designing a new banner and thumbnail for 'Phantoms & Monsters Radio' (I will eventually replace the 'Arcane Radio' name). I expect a lot of changes at Phantoms & Monsters in 2022, including new formats and merchandising. If you would like to submit design concepts and discuss terms, please forward to lonstrickler@phantomsandmonsters.com - Thanks. Lon
-----
Chicago / Lake Michigan Winged Humanoid / Flying Entity Sightings & Encounters
UPDATED: Chicago / Lake Michigan Winged Humanoid Regional Interactive Map