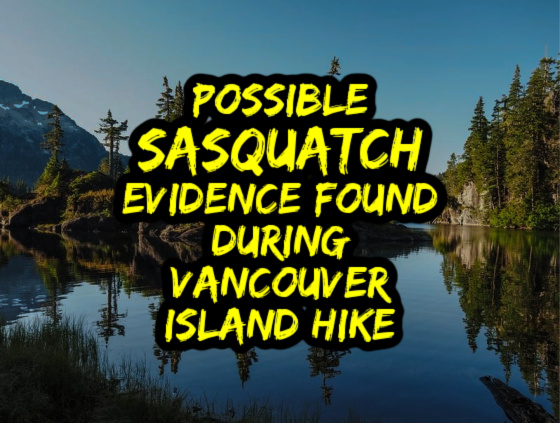 A Canadian hiker is on Vancouver Island with his father when he discovers a curious huge fresh foot print that seemed to suggest that it was not human. Could it be a Sasquatch?

"I was hiking with my Dad in late September 2018 on the West Coast of Vancouver Island, which is usually when bears are fattening up for hibernation and most likely to be aggressive. Since we were a couple days walk from either trailhead (and medical attention) we were on high alert. It had rained constantly and we had only seen a single other hiker the whole time, he was traveling in the opposite direction as we were (he was heading North we were South bound) and we had camped beside him 2 nights prior. So for the whole trip the only tracks that we saw that looked remotely fresh were a single set of hiking boots coming towards us left by a pleasant and solitary German tourist and we only saw them in places with extensive overhead cover. All other tracks were washed out and filled with rain water due to the days and days of constant rain that was doing the best it could to fuck up our vacation and make our packs even heavier.

We were approaching a blackberry patch between ridges that hugged a small creek and smelled what we thought was a particularly stinky bear. Since the blackberries were on both sides of the trail with only about 3 metres between them, we had our heads on a swivel. There was no overhanging trees as this particular berry patch was dozens of metres across and two or more metres high. My Dad told me to hurry through as quick as we could and made a comment about how smart it was that we were wearing bear bells and how dangerous it is to startle a feeding bear. He was a couple metres ahead of me when I looked down and saw a footprint.

It looked like a bare human footprint, except that it was two inches wider and at least two inches longer than mine, and I have size 14 feet. It also had dermal ridges and only had a couple rain drops in it. So whatever made it had stepped there literally moments before. The scariest thing about it was that there was no other prints, so whatever had made that track had stepped out of the eastern side of the berry patch across the trail (3 metres) and into the western patch in a single step. I was so startled. I looked around as much as I could before my Dad told me to, "hurry the f*ck up." That was the only track there that wasn't now a small puddle, so before you discount it as a double stepping bear paw print (where a bear's back paw steps into the print of it's front paw) there is no way a black bear could have crossed that 3 metre distance without leaving more prints. Say what you want about bears, they are not at all graceful. There are also no Grizzlies on the Island, and a cougar wouldn't have left a print that looked anything like that, even if it stepped in it's own track.

It also couldn't have been a hoax because a person couldn't just stand in the berry patch with a pole with a footprint on it as they would be "interacting" with bears on a dangerously consistent basis. Also, why would someone sit in a berry patch in the relentless west coast rain in the hopes of pranking people that might not pass by for days? It doesn't really make sense to go to that much effort, risk that much danger and basically swim in a lacerating blackberry bush for multiple days.

I didn't believe in Sasquatch before that, but now I don't know what to believe. I was a service plumber for years and that smell is still in my top five worst smells of all time. And I will never forget the image of the rain drops hitting that fresh track, as I stared in disbelief." MS

PURCHASE NOW!
**********
TODAY'S TOP LINKS
When Government Agencies Take Trips Into the World of the Paranormal and the Occult
NASA hires priest to prepare humans for an alien discovery and contact
UFO Photo Said to Resemble the Famous 1561 Nuremberg UFO Painting
Diary gives new insight into Victorian seances
'I run a haunted pub where a woman claimed a ghost tried to kill her'
ARCANE RADIO | Question & Answer LIVE SUPERCHAT Ongoing cases, new investigations!
Become An ARCANE RADIO Patron
CLAUDIA GRANGER'S EarthStar Talk YouTube Channel
Join CLAUDIA GRANGER'S EarthStar Talk Facebook Group - Ask Her Your Questions
-----
Hey folks...I'm putting out an 'open call' to graphic artists who would like to participate in designing a new banner and thumbnail for 'Phantoms & Monsters Radio' (I will eventually replace the 'Arcane Radio' name). I expect a lot of changes at Phantoms & Monsters in 2022, including new formats and merchandising. If you would like to submit design concepts and discuss terms, please forward to lonstrickler@phantomsandmonsters.com - Thanks. Lon
-----