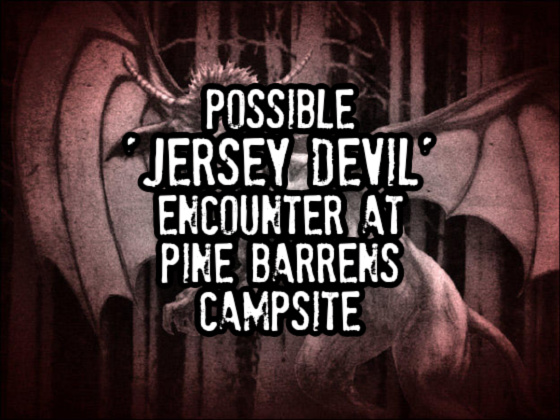 A group of friends were spending the weekend in the Pine Barrens, camping and riding dirt bikes. The campsite was setup in a clearing. The witness believes that he may have seen and heard the Jersey Devil.

"I want to be as detailed as possible. I live about 15-20 minutes from the infamous Leeds Point birthplace of the Jersey Devil. Growing up we were often out in the pines paintballing, riding dirt bikes, exploring old abandoned houses, and mudding. We grew up with the Jersey Devil lore very present in our life. My sister was  12 years older than me, and her husband (new boyfriend at the time) took us out to Leeds Point. We would find old run-down houses and say that it was the old Leeds house to spook us and things like that. We never took it for more than a local legend. As we got older we became more fascinated and even tracked down the original house through the locals. The house is just an old crumbling foundation at this point.

My buddies and I hadn’t been camping or riding in a while so we decided we would do a two-day ride and all-day campout and party all night for the weekend. I had just finished restoring a dirt bike that I had found in my brother's basement. I was super stoked to shred it as it was my first and to this day only build.

We drove out there and found a clearing that was quite odd. I heard about strange phenomena involving cleared circles that don’t grow plants. Wasn’t until a couple of years ago that I heard about them being referred to as the 'devil's tramping ground,' where demons would frequent. Seemed like an ideal spot to set up camp as I was none the wiser at the time. We set up and rode all day, and partied all night. Nothing strange occurred that first night.

We woke up in the morning and it was overcast. The whole vibe of the day was off. They were calling for rain at night but we were determined to get this last summer camping trip off, so we decided to stay. There was a large patch of gravel at one end of the camp. It was getting tamped down as were constantly in and out of the camp for drinks and gas over the two days (it will be relevant later).

The second night we all went to bed around 12-12:30 am. Around 3 am I woke up and had to relieve myself badly so I got out of my tent and went over to the edge of the camp opposite of the gravel patch. As I did my business, everything got quiet. Mind you, this is summertime in New Jersey. The crickets, toads, and even birds around that time are usually singing away. I thought it odd but figured maybe I spooked them stumbling through the darkness.

I started to get this uneasy feeling of dread like someone was watching me and started to hear what sounded like hooves clopping on that gravel patch. It was so dark but the moon was bright so I could make out silhouettes and I saw something on the other end of the camp by the gravel entrance. I thought a deer wandered into our camp but thought that unlikely because jersey deer are scared to death of humans. I think it realized I noticed it and it shifted its head to the side almost with a puzzled look when it did the moonlight hit its eyes revealing them to be glowing red and beady.

My self-preservation instincts kicked in and I inched my way over to my tent thinking if I moved slow enough it wouldn’t be able to tell I was moving until I stepped on a beer can. The can-crushing sound startled whatever was standing there. I heard the clap of hooves and what to me sounded like an enormous bird take off. I sat up the rest of the night petrified.

It began to rain around 5 am I went over to look for tracks But by sunlight, the area was washed out. Never told my friends. They wouldn’t have believed me." BB