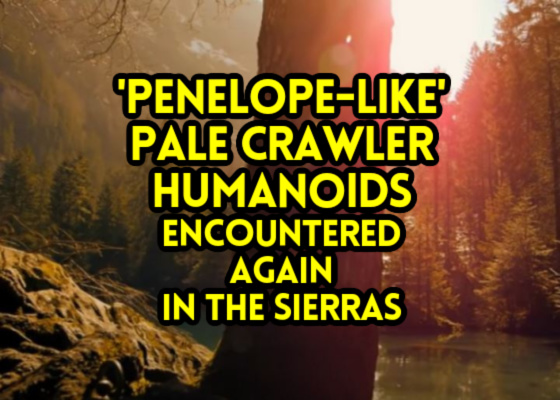 Family and friends were camping in the Sierras near Yosemite, California when they encountered 2 pale crawler humanoids, similar to the 'Penelope' incidents throughout the range.

"My family and friends were up in the Sierras outside of Yosemite, when 2 pale crawler humanoid approached us around midnight. There were 5 tents with people inside. My son was with me. I yelled out for everyone to start praying, the moment these two pale crawler humanoids started their banshee blather at top volume. They never got closer than fifty feet and usually only stuck around, 3 nights in a row, for about half an hour. No problems otherwise.
Also, we talked about it over coffee the next morning. None of us ever felt any fear and stayed calm and relaxed. And we all knew exactly what these things did in 2015. He gives you the confidence you need and it's no sweat at all with these creatures. You have power over them, with the Blood of the Lamb." A

A couple are vacationing in the Sierra Nevadas. One early morning they encounter a crawling pale humanoid. The description is very similar to 'Penelope', a humanoid I've been investigating for many years.

"It is my hope to find those who have had a similar experience. Especially in the region of the Sierra Nevada Mountains, on the border of California and Nevada. I'm in the world of broadcast. My eyes are my greatest tool for accuracy and detail. I am an accomplished visual artist and have studied the movement of animals closely since I was very young. I also have been coming to the same camping area for over 40 years, so scouting fish and other wildlife in the wilderness is second nature to me. That is to say, I have exceptional eyesight and I feel I am a better witness to an event than most others. Not only because my keen eyesight, but I also have the ability to keep my calm under extraordinary situations.

Having said that in this instance I have a fellow eyewitness. My wife of 13 years is the most skeptical of people that I know. She would never have believed my story if she wasn't there in the passenger seat beside me that night.

I do not know how to categorize the creature I saw that night. What I saw was very humanoid and that's what is so disturbing. The location was Bridgeport, California at the Twin Lakes Resort. This is a remote fishing lodge high in the Sierra Nevada mountain range. The resort sits in a valley at about 7000 ft and in the shadow of the mighty Sawtooth Ridge. A beautiful secluded spot with no cell phone service and tons of wildlife. The date would have been just after Labor Day 2014 at approximately 5:30 am. We had just finished loading the fishing gear and were headed to the creek for some daybreak fishing.

The creek campground is about a quarter mile from the lake cabin. I have taken this short trip literally a hundred times before and it is always active with nocturnal wildlife, so we are always on high alert for the regulars like mule deer, black bear, jackrabbit, and even rattle snakes on occasion.

This morning was a little foggy and still very dark (the high mountain ridges keep the valley dark from dusk till dawn). I had just passed the small trailer campground as we saw something crossing the road coming in our direction, maybe less than 50 yards away. It looked very light and very close to the ground. It was the size of a large goat but it moved very oddly. I thought 'goat' because quickly I remembered there were sheepherders on the side of the mountain but I hadn't seen them for maybe 30 years. I needed a second to figure out exactly what I was seeing, so I asked my wife in the front passenger seat, "What is that?" pointing at a thing running in our direction that the likes of which I know I had never seen before. I was mostly confused because its limbs were not bending or moving in the right way that a deer, bear, rabbit or cats were supposed to move. My wife could only say slowly because of disbelief, "Whaat Thee Helllll...?"

Now when my lights came across the creature it was crossing the road and we got the feeling we totally surprised it. As I turned on my high beams it seemed to get very irritated as it turned its long human-like neck towards us and almost shook its head as it gave us a glare and started to double time along the road now in our direction. We were getting closer but instead of being able to more positively I.D. the creature I was only more confused, mostly because this thing's legs weren't broken at all it was running on them like that! Long lean limbs but it was crawling! Creeping impossibly low to the ground. It's torso no more than 5 inches from the ground! Yet it was moving at a strangely incredible pace. I wondered first, with such long limbs, why it was so low? And not running on the bottom of hooves or paws. How could it run so fast? The order of the feet landing was completely wrong too, and if it was really trying to retreat quickly it was not bounding or bouncing or swaying side to side. Its limbs moved in unison like a crab or spider. It appeared to me to be a puppet being moved by a marionette, very bizarre. Maybe because I was so puzzled and troubled that I could not classify this animal it kept me from flipping out when we got close enough to see the facial features.

I should describe the features that I saw clearly and up close. As mentioned a human-like torso about 4 feet long, no tail, human-like haunches. As we passed it I saw it was not shaved at all, it was hairless and had pale skin. Its limbs were long. Thin very defined muscle and sinewy. Although it was crawling close to the ground it had large very human/ape shoulders. I've only seen such shoulders on upright walking animals. It seemed to be running on its front knuckles or claws. Imagine a sloth but foot long fingers or claws. The neck was thin and long holding a forward gazing predator head. The skull had features closer to a human/ape than any canine, cat, rodent or cervidae. The skull seemed have a heavy protruding eye ridge, with a flat curve leading to the nasal opening. Then even stranger the mouth. There was no long snout. This was a tight lipped 'human' mouth with a large chin, that almost seemed to grin. But somehow I knew that it was not a friendly grin, almost evil. But how would an animal have an evil grin right? If that wasn't enough to freak us out then came the eyes.

So at first sight my headlight lit this weird thing up and as with all nocturnal animals, the first noticeable thing is always the reflection of it eyes in the car lights. Like all the rest of the many animals I had seen on this tiny stretch of road, their cover was blown instantly. Well not the case this time, and of all the troubling things I had observed this probably is the most unexplainable. I was driving right into it and I could see the eye brow ridge. I saw deep eye sockets, but no shiny large or tiny eyes, just the sockets. As I was sure to peer deep into whatever animal it was eyes as we came within 15 feet of it. Well when the moment of truth came. My wife and I were horrified when all we saw were deep RED sockets! Like the thing had no eyes or there was a red membrane over them.

Well I just about drove off the road and tried to track the thing, but something told me I was better off just watching it run in a cloud of dust into the chaparral. The frigging thing turned its head to look at us, was grinning all with just red eye sockets and it just zips away never breaking its creepy crawl.

So that's my sighting. I never heard of or saw this thing again. And I have no idea what it could of been. Nothing adds up. I really feel I was not supposed to see this thing. People like to say maybe it was an experiment gone wrong or a mutated deformed animal but what I have to say to that is this thing wasn't sick or dying. It was strong, aware, fast and would kick the ass of whatever would mess with it. So if this were a real cryptid someone else must have seen it since this was a campsite. What would it be doing so close to humans if it depended on seclusion for survival? Doesn't add up." ZD

NOTE: Those readers who have been with me for several years are familiar with the 'Penelope' sightings in the Sierra Nevadas. Here is another link - Is 'Penelope' More Than An Urban Legend? What do you think? Lon 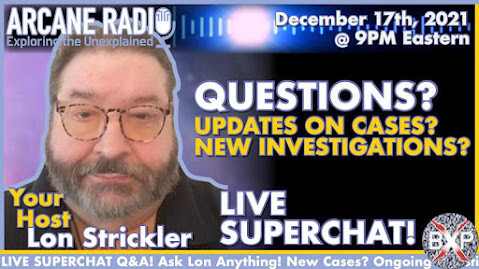