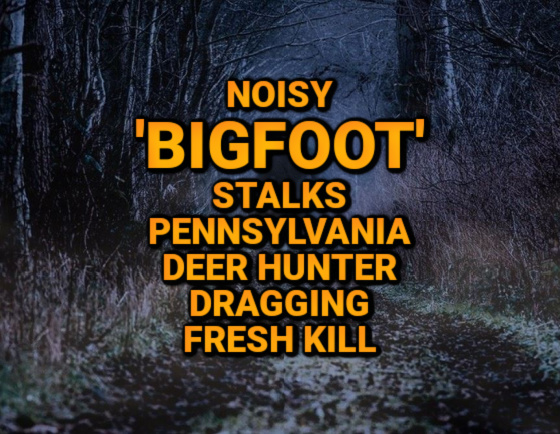 A Pennsylvania deer hunter is likely stalked by a Bigfoot while dragging his fresh kill back to the cabin. The beast screams and howls, and literally tears up a large patch of mountain laurel.

"This didn't happen to me, but it was told to me by my ex, her Dad (who was there), and the guy that it happened to, my ex-brother-in-law. None of them were prone to tall tales nor embellishing facts.

About three decades ago (mid 1980s) in the Appalachian forests of central Pennsylvania, my brother-in-law was hunting whitetail during the early archery season. He, as well as all of his family, is an avid outdoorsmen. Hunting, fishing, trapping, boating, camping, etc. In all seasons. This particular brother-in-law was close friends with a well-known outdoorsman from books, documentaries, and his own TV show for many years, and was as home in the wild as most folks are in their own living room.

Late in the afternoon, he tagged a nice buck quite some distance from the cabin, so he quickly gutted it and began the long drag back, hoping to get to camp before dark. As he described it, about 15 minutes into his trek, he began to be aware of something behind him. The further he went, the more certain he became that whatever it was was following his trail. It probability locked onto the blood scent of the deer. He knew it was big due to the sounds he could hear in the brush and the occasional 'snort-like' whoosh of air. He knew there were sightings of mountain lion in the area and bear were fairly common, as was bobcat and wild dogs. But this just didn't seem to fit any of them. He quickened his pace, but not only did whatever it was behind him keep up, it seemed to be closing the gap.

Finally, he took a desperate gamble and threw the deer across his shoulders and all but sprinted as best he could through the heavy brush and mountain laurel for the remaining quarter mile or so to the camp. After he had covered about half the distance, behind him he heard a blood-curdling howling scream from the approximate area where he had shouldered the deer. Heart racing and adrenalin pumping, he covered the remaining distance to the cabin in record time, even leaping across the creek while still carrying the buck! All the while he could hear growls and screams mingled in with loud pops and cracks almost like gunshots.

At camp, the others had already returned and were standing outside listening to the commotion when he came running in. They quickly hung the deer in the shed, locked it and then locked themselves in the cabin. The sounds continued on and off for close to an hour at different points around the cabin, then everything went quiet. Needless to say, nobody slept very soundly that night.

The next morning, they went to investigate the area where the original screaming and sounds had begun, hoping to identify the sign and from that, the animal responsible. The ground was too hard and rocky for any conclusive tracks but what they did find, not more than 15 yards from where he had shouldered the deer, none of them could explain. In the middle of a thick stand of mountain laurel, an area of about 20 feet by 20 feet had been literally ripped apart. Laurel is a very tough, fibrous, bendy wood. It is almost impossible to break it. These were twisted and snapped as though they were brittle twigs. There were no claw marks, no teeth marks, no antler or horn marks, no saw or hatchet marks, just splintered, ripped, torn mountain laurel, some as thick as 2 inches. Whatever it was, it was very big, very strong, and extremely mad. That area was torn apart in a fit of rage.