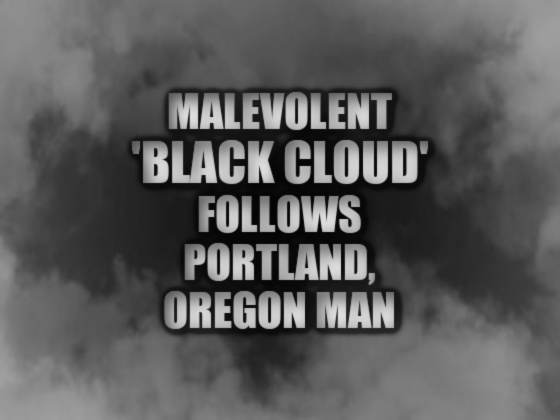 A Portland, Oregon man is driving home and notices a dark cloud following him and keeping pace. It continued to do so. Later he was attacked by this force which caused red marks on his side.

"First off, I'm from Portland, Oregon. Tonight was a relatively clear night. It rained earlier in the day but there was no any other weird weather.

I know how this sounds, but this really happened and freaked the f**k out of me. I'm naturally a pretty tough guy, but this made me call my wife, while shaking like a leaf ready to cry because it was freaking me out so bad.

Tonight, I was on my way home from my friends. About 10 minutes into my drive I noticed I was being followed. Literally all the way home, more than 10 miles from the time I noticed by this dark cloud thing. I was on the freeway going about 60 mph when I noticed it.

It never missed a beat. Literally kept exact pace with me for 10+ miles.

Literally the only way I can describe the thing is as a small thundercloud, pitch black but somewhat able to see through. It was about 5 feet high and I'd guess about 25 to 30 feet long.

I was the only car on the road, and out of the corner of my eye in the right hand lane next to me was this thing. A cloud is the best way I can describe it. It was very dark and formless, kind of translucent. I could barely see through it, but it was transparent enough for me to not 100% be sure it was there.

It really freaked me out, so I called my wife, and then I decided to change lanes into it to see if it would disappear, and it did. I thought so anyway.

About 30 seconds after I lost sight of it, it instantaneously reappeared right outside my driver window. It was a little bit taller than my car and was about 3x as long.

When I took the exit to get home, it disappeared again and I thought I lost it. Less than a minute later it reappeared outside my passenger side.

It was almost as if it would just float over my car from one side to the other while keeping pace with me the entire time until I turned I into my driveway, where it disappeared again.

My driveway is about a half-mile long, shared with 5 other houses. The house right before mine has a dog that ALWAYS runs up and jumps on the chain link fence and barks like clock work. But as I drove by it tonight, the dog ran toward the fence and stopped dead in its tracks about 15 feet from the fence and didn't make a sound. THIS HAS NEVER HAPPENED BEFORE. Seriously, this dog never misses a chance to bark at the neighbors.

My wife was waiting in the front yard for me when I pulled up but because of the darkness of the driveway and lack of lights she said she couldn't see anything.

Has anyone ever heard of anything like this? I'm honestly freaking the hell out right now." KK

"My wife and I couldn't sleep at all. Neither of us have ever experienced anything even close to what happened a few hours before.

My older brother is our roommate, and he came home from work a little after 3 am. When he came in the door he immediately noticed something was up with us, so I told him the entire story. I checked the outside of our car for any weird markings, or some sort of substance or fluid that's not supposed to be there.

We spent about 10 minutes looking over my car, and we didn't see anything. We were about to head inside, and my brother was talking about ways to get rid of demons (he has no idea what he is talking about but he thinks he does). This is where sh*t gets real f*cked up. My brother stopped talking mid sentence and said "did you feel that?" He was talking about the extremely cold spot that just settled on us, then immediately something hit me HARD in the rib cage and threw me right into my brother.

I just about sh*t my pants. No f*cking joke. I straight up yelled "F*CK THIS SH*T" and ran as fast as I could into the house.

Picture of the mark on my ribs: https://ibb.co/cLJyDbn

My brother came inside a few seconds later absolutely awestruck.

I'm beyond scared and I don't know what to do." KK

NOTE: It has been several days since the incident. I have offered my help. There have been no updates or contact with the experiencer. Lon