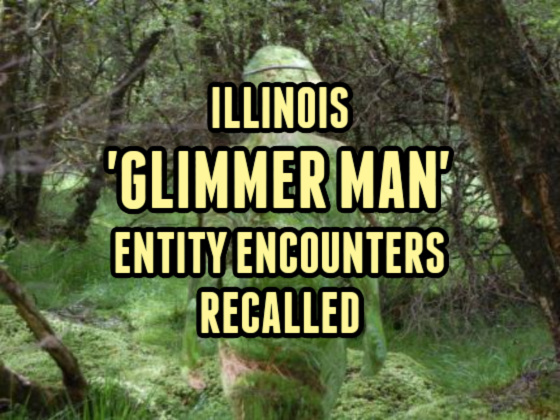 A Illinois woman recalls her early and later encounters with a 'glimmer man' entity. Her description was parallel to the 'Predator' alien in the film series. Have you had a similar encounter?

"This is 100% true and is really hard for me to share because anytime I have tried to tell someone else about it, I get laughed at and accused of just trying to pull their leg. I recently seen an article about a woman who was hunting and seen a invisible/cloaked creature that she described as almost like a "predator" from the movie of the same name. I read her story and seen the picture she took of said "predator." I am not dismissing her story, actually quite the opposite, since I too have encountered something similar, and is what prompted me to seek out if anyone else has encountered a "predator" in the woods. Now on to my encounter.

When I was about 5 years old I was playing by the edge of the woods behind my grandmother's house. I played there often and my grandma just kept an eye on me from the kitchen or living room because the house had huge windows that faced the woods. She would come out every once in awhile just to see what I was up too. I was obsessed with digging in the dirt and collecting unusual rocks and arrowheads that littered the land where my grandmother lived. I should mention this is southern Illinois, not to far from Cahokia mounds, so finding arrowheads was actually not that uncommon.

Anyway, that day, I remember picking out a spot to dig. I had been out there for quite awhile because I remember I had a pretty decent size hole going, when something caught my eye up in the tree that I was next to. I almost don't know how to explain it, but it looked like almost a heatwave coming off the branch of the tree. It was Fall, I remember this because I had my pink jacket on and remember thinking that my mom was going to be pissed because I had dirt around the bottom of the arms from digging. I also remember there being a lot of leaves on the ground.

I'm staring at this "heatwave" and realize it has a human shape. So here I am, 5 years old, and wondering why there is a invisible man in the tree. I remember feeling scared but unsure what to do. Then it started moving and making a faint clicking sound. That is about the time that I decided that I was not supposed to be seeing this, and I high-tailed it back to the house. My grandmother seen I was pretty shaken, and I remember telling her that I just seen 'an angel.' In my 5-year-old mind, I didn't know what else it could be. I had never heard of aliens or ghosts or monsters, so to me it had to be an angel because that's all my little mind could think of.

Fast forward to when I am about 12 years old. By this time the encounter was way out of mind. I loved watching action and sci-fi movies. My dad rented the movie titled 'Predator.' I am watching it with him, and the first time you see the Predator invisible/cloaked I about shit my pants. All the memories from that day digging in the dirt came flooding back. I even asked my dad if Predator was real or if he knew if anyone or any animal that had cloaking ability that I didn't know about. He told me it was all fake. It wasn't like it is today were I could just Google it. I had no access to the internet, so again I just put it out of my mind.

Again, fast forward to about the year 2004. I am grown. I have 3 small children. I just went through a separation from my husband. I moved to the next town over to an apartment with my kids. These apartments are all one level duplexes with there being 5 buildings. I am at the very last apartment of the last building. The apartments are considered "in town" but are on the outskirts. There is a deep ditch that runs behind the buildings with a chain link fence that separates the back yard from the ditch. There are about 6-7 trees on our side of the fence. If you follow the ditch a little bit, you hit a small forest that eventually leads to the country with a larger forest and farm land. I am a smoker, but would not smoke in the apartment because of the kids, so I often went out to the back porch.

One night, I was up late doing laundry and stuff after the kids went to bed. I decided to take a smoke break before I went to sleep. I am back there on the porch and I started hearing this faint clicking sound. I immediately looked to the ditch because I had seen a groundhog out there a few days before and thought perhaps he was out there again. The yard is faintly lit from the outside light that is by they playground that is to the right of my back porch. I didn't turn on my porch light, I didn't normally, if I was just going out for a quick smoke. I didn't see any groundhog or movement from the ditch, so I go back to smoking my cigarette. The faint clicking sound keeps happening and a slight shift of movement makes me look up into the tree to the left of my porch.

It's there! The same invisible thing I had seen when I was five. It is like a distortion and in a humanoid shape. It is crouched down on the branch with an arm out holding on to the trunk of the tree. I couldn't believe it. I was like, "Is this happening? Has it come to kill me from me seeing it all those years ago?" All I could think about was my kids in the apartment sleeping. I ran in and slammed and locked the door. I ran to the kids rooms and made sure all the windows are locked, then I just turn out the lights in the living room and stare out the blinds at the tree to see if I could catch another glimpse of it. I sat there for about a good 10 minutes and couldn't see anything. I begin to think that I am just tired and my mind was playing tricks on me.

Just as I was finally talking myself down, my neighbor's dog comes running across the yard and starts barking at the tree at the same branch that I had seen this "predator" thing. That pretty much freaked me out because this dog was not a barker. I actually have never heard him bark at anything, even at the groundhog that had been hanging out at the ditch. This barking went on for a few minutes until I hear the neighbor lady who owns the dog call him back inside. The dog reluctantly turned to go back home, stopping every few feet to look back at the branch of the tree, until he was out of my sight.

I didn't sleep that night and have never seen anything like it again. I don't know what to think of it. I am a grown woman. I have kids and a good career. I just want to know if anyone else has ever had an experience like this. I know what I saw. Believe it or not. Thanks for taking the time to read this." S