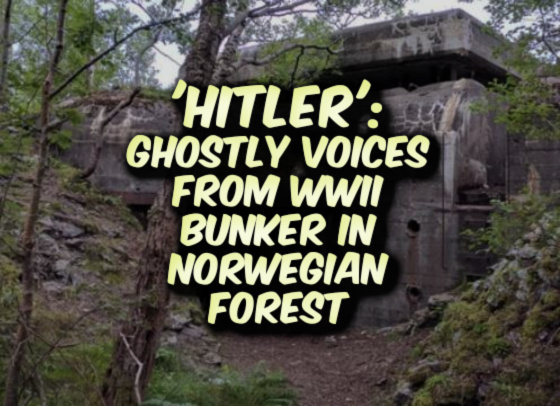 A Norwegian girl and her mother are in the forest and marsh cutting grass. They spend the night at the location. During the night they hear German voices, and the word 'Hitler' coming from a WWII bunker nearby.

"This is a recollection an aunt told me (dad's cousin). When she was around 11 years old, they used to live in a lavvus (Norwegian version of a Native American teepee) between two mountains. There were two small towns located in each fjord. This was in the early 1970s, she is 60 years old now.

She was young, and they didn't have a car to travel with. One day, her mother (my grandpa's sister) asked her if she would go down to the large marsh and cut some grass. We use to cut grass that we put into our fur shoes to keep our feet warm and dry. Those grasses found in forest marshes are the best to use.

They packed some food, took their sickles and walked down into the forest and the marsh. Their dog was also really excited to come along. They started cutting and gathered quite a lot of grass through the day. The midnight sun had started appearing, when her mother decided that it was enough.

They had packed a huge cloth piece, and tied them between 2 trees. They decided to stay there for the night. The lay under it, safe from all the blood-sucking insects. The dog was also sleeping with them.

Then, all of a sudden, her mother sits up. The dog also raises its ears. She asks her what's going on. Her mother tells her to be quiet. Then she hears it. Voices. They hear voices coming from the woods. They both go outside to check. But immediately when they go outside, it turns quiet.

They think that it was probably people fishing or drinking. They go back inside to sleep again. Then, just as they are about to fall asleep, the voices are heard again, this time closer even. This time they can hear that it's a language that they don't understand. Again, they go out and check, and sure enough the voices stop.

Again, they go inside to sleep. But she sees that her mother is not sleeping, so she is also wide awake. Then again, the voices are heard. They hear just 1 word, and they know what language they are speaking. That word was "Hitler." Her mother told her to stay inside with the dog, while she goes and checks. Sure enough, there is no one there.

Her mother comes inside again. She says that there is no one there. She also says that it's just the marsh that's playing with them, and that they could sleep peacefully. So my aunt does fall asleep.

The next morning she wakes up, she looks at her mom. She sees that she hasn't slept the night, and has been up. They decide to quickly pack up, and walk back home.

So, in that place we have huts now, which is above the marsh and the forest, there is a small bunker close to the road. It was used in WW2 for something, and it still stands there to this day." D

PURCHASE NOW!
**********
TODAY'S TOP LINKS
Does the U.S. Government Know Something About Life After Death? And, is it Bad For Us?
C2C's Bizarre Blotter for 2021
Recent Bigfoot Sightings in Illinois and Missouri
This Brazilian Psychic is Being Called a “Direct Descendant of Nostradamus”
FBI Files: Serial Killers
ARCANE RADIO | Question & Answer LIVE SUPERCHAT Ongoing cases, new investigations!
Become An ARCANE RADIO Patron
CLAUDIA GRANGER'S EarthStar Talk YouTube Channel
Join CLAUDIA GRANGER'S EarthStar Talk Facebook Group - Ask Her Your Questions
-----
Hey folks...I'm putting out an 'open call' to graphic artists who would like to participate in designing a new banner and thumbnail for 'Phantoms & Monsters Radio' (I will eventually replace the 'Arcane Radio' name). I expect a lot of changes at Phantoms & Monsters in 2022, including new formats and merchandising. If you would like to submit design concepts and discuss terms, please forward to lonstrickler@phantomsandmonsters.com - Thanks. Lon
-----