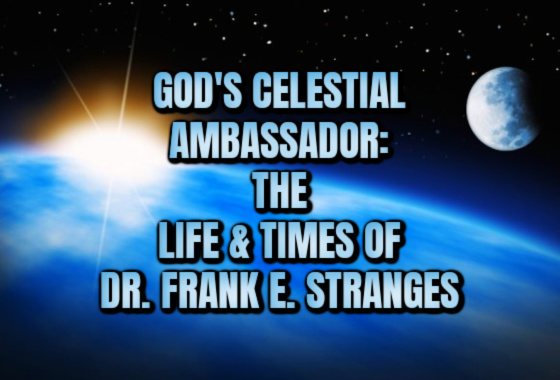 When the evangelist Dr. Frank E. Stranges asked the extraterrestrial visitor to the Pentagon, Valiant Thor, where he was from, he replied, “I am from the planet that is called Venus.”  Then Dr Frank further inquired of the Venusian as to the number of visitors we had here on the Earth that were also hailing from the cloudy planet Venus, and Thor said, “There are presently 77 of us walking among you in the United States,” adding that, “We are constantly coming and going.”

Dr. Frank then asked Valiant Thor if they had “Bibles like ours” on Venus, all the while holding up his personal hardbound, thumb-worn and highly annotated copy of the King James Version that he always carried around with him, in addition to seeking the space traveler’s opinion of Jesus Christ.  The venerable Venusian simply replied “No” to the question about the Bibles; but he did provide a sound theological response to the question about Jesus Christ:

“A long time ago, God looked over onto this Earth and saw the wickedness of humankind and that it was very great.  God, being a God of Love as well as a God of Justice, took upon Himself the form of a man and was born of the virgin, Mary.  He succeeded in bringing humankind the plan of redemption through His precious blood.  Everywhere Jesus went, He was doing good.  In the midst of all of His goodness, kindness and love, He was falsely accused, mercilessly condemned and nailed to a cross.  Even though He healed the sick, cleansed the leper and even raised the dead, none of this was taken into consideration.  They crucified He, the One that came into this world to save sinners.  And you ask me what I think of Jesus?”

The Venusian paused.  Dr. Frank seemed stunned.  When Valiant Thor realized that his interviewer realized that he was asking him a rhetorical question, he continued with his theological explanation:

“I know that Jesus is the Alpha and the Omega of yours and everyone’s faith.  He today has assumed His rightful position as the Ruler of the Universe and is preparing a place and a time for all who are called by His Name to ascend far above the clouds to where His Power and Authority shall never again be disputed.

“I believe that Jesus Christ is the Wonder of Wonders and changes not.  No, not forever and forever.”

As Valiant Thor spoke these wondrous words, Dr. Frank’s heart burned within him and tears filled his eyes.  Then Thor turned toward the window and looked out, declaring, “Frank, it will not be long.  Contend for the faith and you will never miss the mark.”

Of course, Dr. Frank was delighted that the inhabitants of Venus understood who Jesus Christ was and what His mission was regarding the Earth and other human-populated worlds. However, the reverend was curios to know why these same Venusians did not need a Bible to guide them, and put this question to Thor. The Venusian space commander answered with a question of his own.  “Why would we need the book when we are still walking in unbroken fellowship and harmony with the author?”

Valiant Thor Speaks of Life on Other Planets

Dr. Frank wanted to know if there was life on any other planets, besides just the Earth and Venus.  Valiant Thor replied, “There is life on many other planets of which people on Earth know nothing.  There are more solar systems for which man has not even given God credit.  There are many beings that have never transgressed the perfect laws of God.  Humankind on Earth does not possess the right to condemn the whole of God’s creation because humans of Earth have broken the perfect laws of God through disobedience.”

Upon hearing of these other perfected worlds, Dr. Frank E. Stranges remembered that his friend the airport manager, George Van Tassel, informed the attendees of the Interplanetary Spacecraft Conventions held annually at his Giant Rock airport outside of Landers, California, that there were 601 member planets in a Confederation that encompassed 51 solar systems.  Van Tassel and the other contactees out at Giant Rock shared the same message for those in attendance at these conventions:  The extraterrestrials are ready to welcome Earth as a member planet of the Confederation when the majority of the inhabitants of this planet reach a level of spiritual maturity to the point where our governing systems begin to conform themselves to the natural laws that govern the rest of God’s vast universe.  Now he understood that the contactees were, for the most part, telling the truth all along.

Throughout the years in the UFO community, it is seldom that one hears anything of a serious nature with respect to the existence of such a so-called “Galactic Federation.”  Except for a few of the contactees, for the most part, this term would occasionally pop up in more metaphysical circles, i.e., being used by channelers and psychics.    The problem with this type of phenomenon rests in both the reliability of the channelers and the subjectivity of the true nature of the alleged “extraterrestrial/ultra-dimensional entities” whose messages are supposedly being conveyed.  Therefore, it came as quite a surprise to billions around the world when on 8 December 2020, NBC News ran the story about the former Israeli space security chief, Haim Eshed, announcing that not only do extraterrestrials exist and President Donald J. Trump of the United States knows all about them, but also that there is a “Galactic Federation out there that has been waiting for humans to reach a stage where we will understand what space and spaceships truly are.”  Established in April 1983, the Israel Space Agency is a governmental body, a part of Israel's Ministry of Science and Technology, that coordinates all Israeli space research programs with scientific and commercial goals. 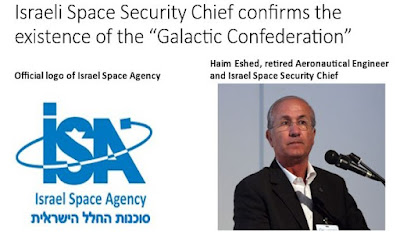 Given Haim Eshed’s fantastic revelations in 2020, together with this year’s NASA Parker Space Probe discoveries of a mysteriously lit up night side of Venus and the Royal Astronomical Society of the United Kingdom’s reporting of life-indicating phosphene molecules on that cloud-shrouded planetary neighbor, more and more ufologists are taking a second look at Dr. Stranges’ account of meeting the Venusian space commander Valiant Thor in the bowels of the Pentagon back in December 1959.