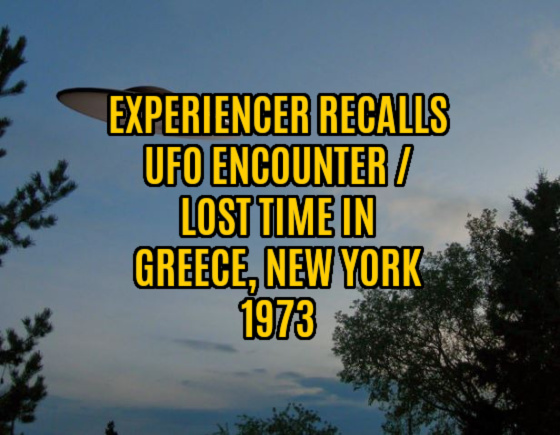 A woman recounts a UFO encounter / lost time that her and a friend experienced while growing up in 1973 in Greece, New York. The craft had appendages and unknown writing or symbols on it.

I recently received the following transcript:

“In 1973, I was 14 years old and this occurred in upstate New York, in a town called Greece. It occurred at the end of the summer towards the beginning of the school year, probably the end of August beginning of September.

I was riding my bicycle with my girlfriend from my house to her house and it was twilight, or approaching twilight, and as we came up to a path that cut through the back of the high school and the football field, I felt compelled to look to my right. To my right, there was a bank of trees and I saw a very large craft rise from behind the trees and almost right about treetop level. It was quiet. There was like no perturbation of the air or anything. It was just silent and it came over the trees and started moving in our direction and she and I got off our bikes and leaned them up against the bleachers.

The craft came towards us very very close. I can't tell how many feet but it was just a little bit above the bleachers. I can describe the craft to you. There were some symbols on the bottom of it. The central part of the body was cigar-shaped and three appendages were coming out from one side and the other and they ran parallel to each other and there were lights at the end of each of those appendages. The craft was very large, as large as the football field, maybe even bigger.

And so there were these symbols on the bottom that looked like. They kind of looked like hieroglyphics or maybe Russian letters but I was 14 so my interpretation of what I was seeing was limited based on that because I don't have any true recollection of what they look like now. I just remember what my impression was then.

So, the next thing I know, she and I, we're standing there and, next thing I know, it's dark! Not too much later, couldn't have been too much later because we both had a curfew. It was dark and the craft was still there and we were standing there looking up at it and from our vantage point we could see what looked like windows, square-shaped, and there was like an amber glow to them coming from the inside and I could see silhouettes of occupants. (the interviewer asked if they had large heads) It's very hard for me to tell. You know, at this point, I can just tell you what my impressions were at the moment and there were no details. It was just a black silhouette and there was movement. You could tell that they were moving and then, yeah, and the ship silently just drifted towards our left. I don't know what direction that was.

She and I got on our bikes and we rode to her house and when we got to her neighborhood there were a lot of people standing on their driveways looking at the lights and talking about it. She and I never spoke of it again really and I’ve heard that so many times. I ran into her about, I don't know, a few years ago at the gym, and asked her about it and she refused to discuss [it]. She seems scared. The shades went down. She was like, 'I don't want to talk about that.' (the interviewer asks if she would do regression and she replies, simply, “No.”)

PURCHASE NOW!
**********
TODAY'S TOP LINKS
How to Tell If You Really Saw a UFO, According to Experts
Making Monsters: Strange and Bizarre Projects of Government Agencies
Top 10 most fascinating archaeological discoveries of 2021
Do aliens exist? The key mysteries that could be unlocked after the James Webb telescope launched
Alien lifeforms ‘unlike anything we’ve seen’ could be hiding in the clouds of Venus, scientists suggest
ARCANE RADIO | Question & Answer LIVE SUPERCHAT Ongoing cases, new investigations!
Become An ARCANE RADIO Patron
CLAUDIA GRANGER'S EarthStar Talk YouTube Channel
Join CLAUDIA GRANGER'S EarthStar Talk Facebook Group - Ask Her Your Questions
-----
Hey folks...I'm putting out an 'open call' to graphic artists who would like to participate in designing a new banner and thumbnail for 'Phantoms & Monsters Radio' (I will eventually replace the 'Arcane Radio' name). I expect a lot of changes at Phantoms & Monsters in 2022, including new formats and merchandising. If you would like to submit design concepts and discuss terms, please forward to lonstrickler@phantomsandmonsters.com - Thanks. Lon
-----