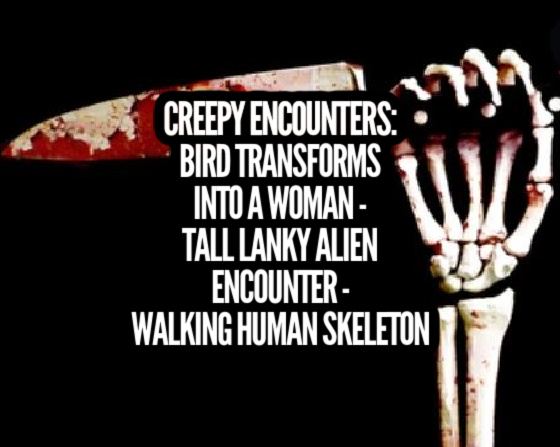 3 creepy encounter accounts: a bird transforms into woman, a tall lanky alien being confronts a boy, and 2 English boys encounter a walking human 'skeleton' with a bloody knife.

“I was a baby when this incident happened. I believe my sister was around 5 years old at the time. My cousins, aunts, and uncles were at a birthday party one Saturday at my grandmother's house in Houston, Texas (I-10 east near wayside, close to 5th ward). All the adults were inside the house around dusk but the older cousins (ages ranging from 4 to 8) and my sister were outside, playing.

My sister isn't sure who noticed the bird in the tree first, but soon all of the cousins noticed it as well. A bird was perched on one of the lower branches just staring at them. Before their horrified eyes, the bird began transforming until it was a woman. A woman sitting on the branch leering at them.

As they began shouting and screaming for their parents, the woman became a bird again. By this time, the parents had come out to investigate the commotion but the bird wouldn't budge. Not until my grandmother, a formidable and salt of the earth type of woman, went outside, did the bird fly off. The house is creepy. It's still in the family and I've had some other strange experiences as did my mother (it was in the family since my parents were young teens).

My cousin owns it now and it's still creepy and old and he doesn't really like living in the little yellow house either. In the beautiful roses my grandmother planted, strange things have been found. Animal bones, guts, melted candles, and other witchcraft type of things. A lady in white has been seen moving from room to room in the past by house guests. she just remembers it being a huge bird.

I asked her recently if she was sure and she said yes, she remembers a lady sitting in the tree then becoming a bird again and flying off. She's very level-headed, hates to talk about paranormal things or anything even remotely out there but she admits it happened." Eva

“I was around 12 when this happened to me. During the time my brother and I shared a room and had bunk beds. He had the top bed while I had the bottom. The room was quite long but really skinny, almost an L-shape if you will. We lived in Alberta, Canada.

Anyways, I remembered waking up late one night. At the time I could not figure out what I was feeling, but now I could describe it as dread and extreme anxiety. I stood up out of bed and checked to see my brother sleeping. As I turned towards the doorway, I noticed it was open. This was odd because we always slept with the door closed to keep the cat out. As I walked towards the door to shut it, I could see a shadow in the doorway that was illuminated by the hallway nightlight my dad had set up for us. I peeked around the corner and that was when I saw 'it'

In the door way was a massive figure. If I had to guess, probably around 6'6"-6'7". Extremely lanky the only detail I could make out was its long skinny arms and its eyes, which were red. I remember staring at it for a couple seconds before it entered the room, having to bend at the waist just to get underneath the door frame. The last thing I remember was it rapidly approaching the bunk bed then it goes blank. I woke up on the floor early the next morning.

I told my dad about it the next day but of course he chalked it up to a bad dream and realistically he was probably right. It is just difficult to get over the fact that to this day I still remember whatever was in the doorway and the exact feeling I had from start to finish. The final thing about the encounter that convinced me something happened that night was my brother. About 2 days later he pulled off his shirt and he had what looked like 3 insect bite marks on his upper right back, forming a triangle. They went away relatively fast but to this day he has a mole in the direct centre of where the "bites" were." PP

"Back in 1982, I was visiting my cousin, Andrew, and we were playing outside, “doing kids stuff.” We decided to walk down to his uncle's house, which was down the path. My grandfather had built the house in the English countryside and no other houses were ever on the lot. The closest house was across the street and there were no graveyards around that they knew of. Nobody was home and, as we entered the kitchen, we heard a woman scream. We stopped dead in our tracks and looked towards the other end of the kitchen where the basement door was, where the sound seemed to have emanated from, and saw something strange. A 'skeleton!'

It came up the basement stairs and turned its head and looked at me. Then it turned its body and started fast-walking towards me with a bloody knife in its right hand. I unfroze, turned and ran out of the house. We ran into the yard and stopped and looked at each other. I said to my cousin, “Did you see that?” and he said, “Yes!” and he asked me what I saw. I said to him, “You tell me what you saw.” And he told me that he'd seen a skeleton and it had a bloody knife in its hand.

I told my parents about it and they told me it was my imagination. I told them, I must have a pretty good imagination because Andrew saw it too. I've never had another experience in that house, before or after.” E