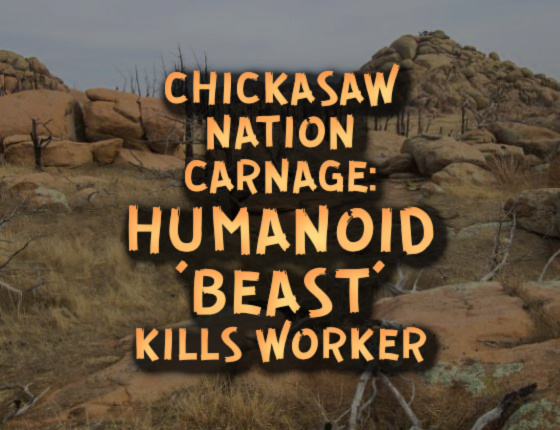 A construction crew from the Chickasaw Nation in south central Oklahoma encounter an unknown humanoid that attacked, killed and fed on one of the workers. What was it?

"There are unknown beasts not to be trifled with. They are terrifying and dangerous. But I'm not positive that our encounter was with something like a Skinwalker...or something much more dangerous.

The incident happened in south central Oklahoma, in the Chickasaw Nation, a few years back. I was working for this construction crew and we’d been hired to do some work on this cabin some rich guy wanted renovating. Simple enough work in that it was just some new inner walls with new insulation, a new roof and some solar panels for off grid power. Other than being in the middle of literal nowhere, it wasn’t difficult work. It was two weeks work and solid pay, so it wasn’t much of an issue with us. That came on the third day of work.

One of the guys on the crew, 'J,' was already there. That was odd on its own since he was always late, but what made it even odder was the way he was acting throughout the day. Then he just up and disappeared around lunch time. Again, that itself was odd since he normally worked through lunch so we didn’t expect him to just disappear. Me and another one from the crew, 'B,' went off to find him while the rest got on with the work. We went to the trucks but couldn’t find him and we were about to make our way back to the shed when 'B' pointed something out. There was a trail of blood leading from the trucks into the forest. Obviously, we thought something happened to 'J' and followed the trail.

It didn’t take us long to find out what happened to him. We found his body. From the looks of it, he had been there all night. 'B' almost threw up at the smell of the body. I was about to tell him to run back and get the others when I heard 'J' call out to us. But…he was laying dead in front of us. Then 'B' screamed and then I saw why. Standing in front of us was some twisted version of 'J.' It…didn’t look right or natural. It had his face, but it was all pasty and and flaking off. There were horns on his or its head and it had this open smile that showed fangs rather than normal human teeth. It was horrifying. It just stood there, staring at us while drooling. Neither of us are scared easily, but both 'B' and I started running the moment it started walking towards us.

Not fifteen minutes we returned with the rest of the crew and carrying a few guns we kept in the trucks. That f*cking thing was still there, eating 'J!' I was carrying one of the guns as was our boss. We both fired a few rounds at it, but it didn’t even flinch! Then the elder in our crew said something I couldn’t quite make out before firing another shot. It was hit and went down before getting up, howling/screaming at us before running away on all fours. It was still wearing his face through all of this. 'J' had been torn to shreds and his death was eventually ruled as an animal attack. But to this day, I wouldn’t consider whatever that thing was an animal.

I’d later ask the elder what he said before taking the shot, but he would refuse to ever talk about it. We managed to complete the renovations without any more issues, but I later found out that the guy who owned it went missing during a stay at the cabin. I never want to see that thing again." N