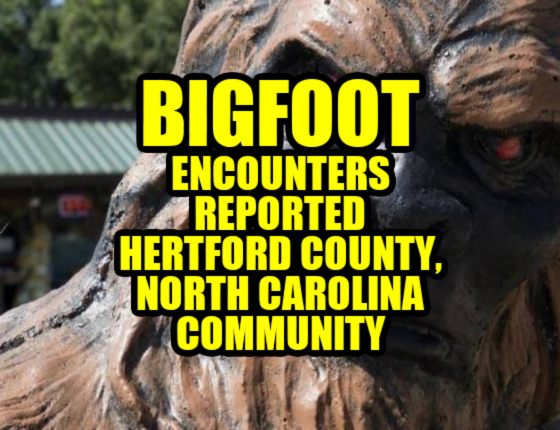 A man in Hertford County, North Carolina describes several encounters and sightings of Bigfoot around his home and in the area. The report seems to indicate that there is a group living in the area.

The following reports was recently forwarded to me:

"It was around late autumn 2014. I got home (Hertford County, North Carolina) from work to find my brother and nephew were sitting in their truck in the their back yard next door. I started walking over to ask what they were up to when a rotten odor nearly gagged me. It smelled like raw flesh and wet hair of a mangy animal. I then heard a low toned growling or moaning coming from the tree line. I immediately joined them in the truck.

We listened for maybe an hour. At times it was so loud that we could almost feel the vibrations from it. We could tell where the thing was, but could not see far enough into the brush to get a visual. It was dusk when this started, and it was now getting dark. It paced the wooded area behind our houses several times before finally fading away. None of us had an explanation nor volunteered to take to the woods with a flashlight.

The next night, the same thing happened again. My brother was prepared with a spotlight, but when we tried to shine it, all went silent for the night. We were sure it was over for good but we were wrong.

I got home early the 3rd day and was met by a farmer who lives on opposite side of the highway from us. He told me that he was cutting weeds from his “back” pasture when a large piece of wood was thrown at him, He wanted me to go over and pick up his equipment he had left behind. He was very upset. He visited for a while, and we told him about our experience. Luckily for all of our egos, our smelly friend made one final show.

We heard a growl just like the last 2 evenings. Our farmer friend then did something we hadn’t thought of, he yelled at it. The vocalization immediately changed from the grunting into loud high pitched yodeling screams. As if it were trying to answer. The thing obviously started running away, but continued “whooping.” This was the first time we heard actual foot steps. I am sure was bipedal, as it sounded like a human running and pushing branches away as it went.

While we couldn't claim to be eyewitnesses, I was soon approached by a guy that occasionally worked for me. His brother and 3 co-workers from a local construction company were headed home from work. When nearing my house, the driver blurted out “look at that monkey!” He stopped the truck as the creature crossed the road, about a 50 yard sprint. After a moment of silence, he remembered saying “there ain't no monkeys here.” He described it as 6 feet tall, dark in color, mangy and lanky. None of them knew of my recent experience, so this was amazing for me to hear.

Yet another community member came forth after that. A farmer lady who lives just to my north confessed that she had become afraid to go out to her garden. She felt she was being watched or stalked while out there. The same spring, a Boy Scout troop took their annual canoe trip on the river that flows through the area. They were scared by loud vocalizations along the way and consequently never went back.

The following spring, I heard the groaning sounds again. This time not as loud and coming from the opposite direction. I dismissed them as a possible cow in distress. I called the farmer who owned the land adjacent to me and told him what I heard. He laughed at me and said he had sold all his livestock months earlier. My brother lives between me and the area from which to noise was. Hoping to blame his dogs, I asked him “what the hell is wrong with your dogs?” He replied that the dogs were cowering under the front deck and would not come out." MG

-----
Hey folks...I'm putting out an 'open call' to graphic artists who would like to participate in designing a new banner and thumbnail for 'Phantoms & Monsters Radio' (I will eventually replace the 'Arcane Radio' name). I expect a lot of changes at Phantoms & Monsters in 2022, including new formats and merchandising. If you would like to submit design concepts and discuss terms, please forward to lonstrickler@phantomsandmonsters.com - Thanks. Lon
-----
Chicago / Lake Michigan Winged Humanoid / Flying Entity Sightings & Encounters
UPDATED: Chicago / Lake Michigan Winged Humanoid Regional Interactive Map