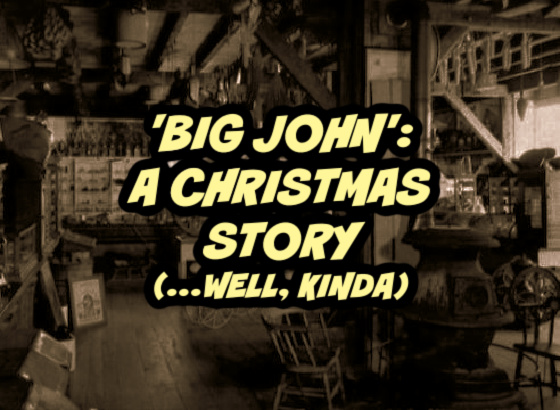 The following account was a bit of a holiday tradition here at Phantoms & Monsters. The last time I posted this account was during the 2016 holiday season. Well, I decided to dust it off and post. I hope you enjoy.

This story was forwarded to me in 1998. I was told that it is a true tale despite the bizarre details. Even though it is holiday related, I had some reservations since there is a combination of death and Christmas. Nonetheless, I receive many requests by other bloggers to use on their site:

Hello – I have a disturbing Christmas-related story that took place in a remote small town located on Mount Desert Island, Maine. My name is George and I have lived here all of my life. I hesitate to name the town since this story could carry unintended consequences for the residents. I know that the story is true because I was a witness to it.

It started in early December 1960 when I was age 12. Each week, my mother and I would walk to the local supply store in order to stock up on whatever we needed at the time. We didn’t have the car because my father used it for his work as a state employee. He was away from home for several days at a time. The walk wasn’t too far but it was a bit hard during the winter since we had heavy snow at times.

The store was owned by a wiry old man name ‘Big John’ Corneau. Big John was well-known in the area since he was a sort of legend after he had saved the life of a girl in the 1930’s who had been attacked by a rogue grey wolf. He would show the scars on his arms from the confrontation to the local kids when they would come into the store with their parents. Big John was also a storyteller – and I mean some real whopper tales, especially when it pertained to his personal history.

On this particular day, I was admiring Big John’s small Christmas tree with wooden ornaments that he claimed he carved himself. There were all sorts of animals, including bears, elephants, tigers, etc. There must have been 50 or so wooden ornaments. As I stood in amazement of the detail in these carvings Big John walked up to me and sat down in a rocking chair beside the wood stove. He lit his small black pipe, sat back and rocked away while watching me examining the Christmas tree. After a minute or so, John asked me if I believed in Santa Claus. I was surprised by the question but assured him that I no longer believed in the legend. John looked away, smiled and said “well, that’s good. I didn’t want you to be disappointed this year.” I was confused by his statement. What did he mean?

A few days later, my mother asked me to walk to the store for a few items she needed. My aunt had stopped over for a visit and my mother was busy with her so I made the lone jaunt. This wasn’t unusual since I was now old enough to do this on my own. When I reached the store, Big John was sitting in the rocking chair reading a magazine. He looked up and asked me if he could talk to me. I sat down on the small chair on the other side of the wood stove anticipating one of Big John’s tall tales. What he told me was more than I ever expected.

Big John’s demeanor started to change – whatever he was going to tell me was probably more serious than one of his typical parables. He looked into my eyes and said “something unusual happened last Christmas Eve.” He paused - then continued “I saw the dead body of Santa Claus.” Well, I’m not sure what my facial expression was but I can tell you what I was thinking – this old man was four quarters short of a dollar. Again he said “I really did see Santa Claus’ dead body.” I’m thinking to myself…why is he telling me this? He started to explain what happened.

Last Christmas Eve he was at home getting ready for the drive to his sister’s house on Christmas Day. He then heard a huge crashing sound in the woods near the house. He looked out the bedroom window but couldn’t see anything, so he decided to investigate. The snow was very deep all around the property and into the woods. It was a clear cold night and the moonlight was bright. Big John held a camp lantern in front of him as he made his way through the pine forest. Then he saw something lying in the snow. As he got closer he noticed a man with a blood-stained white beard and hair dressed in a tattered red-colored coat and pants. Big John knelt down to check the man’s condition. It was obvious that he was dead. In fact the body was terribly mangled though there was little noticeable blood. The body looked as if it had been dead for a few days. Big John explained that he reported finding the body to the authorities who soon retrieved the remains. He said that the police told him that they wanted to keep the death quiet until they determined the identification of the deceased. He agreed not to mention the incident.

I asked Big John “why are you telling me?” He smiled and said “because I have to tell someone.” He got up from his rocking chair, walked behind the counter and reached into a drawer. He walked back toward me and handed me a pair of wire frames without the lenses. “Take these….these belonged to Santa Claus”. I placed the wire frames in my pocket and told Big John that I had to get going because it was getting late. I bought the items I came for and hurriedly left the store – my head was buzzing all the way home.

For two days I wondered why Big John decided to tell me the story. I eventually determined that this was just another one of Big John’s ruses. I placed the wire frames in a shoebox and pushed it deep into the recesses of my messy closet.

On Christmas Eve my mother came home after walking to the store. I was sitting at the table working on a new jigsaw puzzle. I heard her asking someone on the telephone if they knew why Big John’s store was closed. By this time my father was home so he decided to drive to Big John’s house to make sure he was OK. After an hour or so my father returned and said that Big John wasn’t home but his car was in the driveway. He had also noticed smoke coming from the chimney so the fireplace was still burning. He decided to call the local sheriff and make an inquiry.

After several days no one had seen Big John. His relatives and friends were contacted but no one had any information. The sheriff was finally convinced that something was wrong so he entered the house. Nothing unusual was found – no clues as to Big John’s whereabouts. The next logical place to look was the store. Here is where the story gets fuzzy.

I had no knowledge of what the sheriff had found until my father told me a few years later. While searching the inside of the store, the sheriff and a deputy found a large mound of old rugs in the middle of the ground cellar floor. The deputy started to remove the rugs until he started to notice an unmistakable odor. Before he removed more rugs the district coroner was called to the location. What they discovered was both unusual and confusing. There were skeletal remains of a human body with a tattered red coat and pants. Well, I’m sure my jaw noticeably dropped. I told my father the story Big John had told me – eventually I told the same to the sheriff. I also retrieved the pair of wire frames and handed it over to the State Police.

Since that time I have not heard or seen anything further concerning this incident. I suppose there are various scenarios that could be created from the story but I just wish I knew what happened to Big John.

NOTE: at the time I received this story (1998) there had been no further information on Big John Corneau or the body found in the cellar. I did confirm (through a constable in Ellsworth, Maine who had acquaintances living nearby) that a situation with a few similar circumstances did occur in a hamlet in the northeast section of the island very near the Acadia National Park in the early 1960's. He was unfamiliar with 'Big John' Corneau or if the case was resolved. Lon