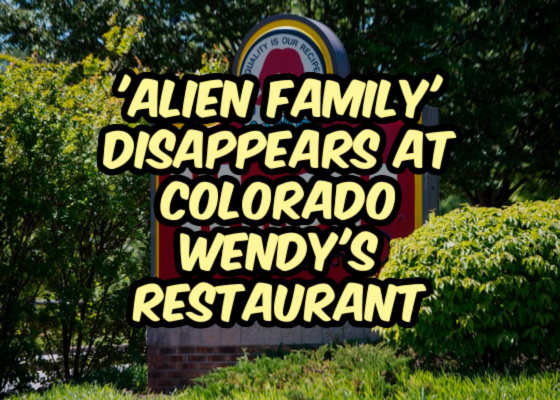 A teen boy and his sister are at a Wendy's restaurant in Trinidad, Colorado. They notice a strange family that seems so out of place. The woman then states 'mothership.' They leave and suddenly disappear.

The question asked. 'Have you ever seen an alien being (EBE)?'

“It was 1987, at a Wendy's restaurant in Trinidad, Colorado. I was 16. Family trip from Washington state driving to Texas. Crammed in the car are my grandparents, sister and my mom and myself (It was not a fun ride, trust me). We stopped at Wendy's for lunch. It was packed. Luckily there was not enough room for the 5 of us to sit together. And at 16, I was in the typical for that age mind set of "get me away from these old people" and grabbed my sister and headed to the only other empty table left. My mom ordered for all of us.This was way before cell phones, so two bored kids can't help but people watch. And what we saw and heard still freaks me out. To. This. Day.

Our table was right next to (approximately 3 feet) from two adults and one child, he looked to be about 9 or 10 years old maybe. I noticed right away something was off with these people. My sister noticed too. She kicked me under the table and raised her eye brows their direction. My eyes had already been on them. Sitting down I began to closely observe them. Two adults, the woman had long brown hair and dressed rather plainly and had a knee length light tan trench coat on, even though it was at least 85 degrees out and in August. She looked like she was maybe in her late 40's or early 50's. The man looked similarly plain with short brown hair, no lower facial hair and had on glasses that were way too big for his face. The kid appeared weirdly dressed. Like clothes that were not typical for the 80's but, right out of a different era. Short light brown hair. All three of them looked like they had never been in sunshine-in their entire life. All of them had large eyes. I was close enough to see they all had brown eyes. Their ryes were strangely mesmerizing, but, only from my vantage point of non-direct eye contact.

I was staring, but, they never once looked at me or my sister directly. They reminded me of what someone might look like after living in darkness for years, no color in their face and pale looking lips. I remember thinking at the time "who are these pasty looking people?"

In the middle of the table sat 7 or 8 hamburgers, in their wrappers. 5 large fries and no drinks. And they WEREN'T eating. Not one fry, not one bite. And how are they going to eat all that food without a drink? I was convinced they clearly had to be vampires. I mean, right? I settled into that conclusion. They were blood suckers and that's why they don't have drinks!? At 16, that's the best I could deduce.

My mom, by this time, had our food in hand and dropped it by our table. I hadn't even noticed her until she was walking away. I took my drink and starred right at them while sipping it. They were out of place. Were they foreigners? Had they never eaten fast food before? No. They are clearly vampires, whom don't mind being in the light, so they must also be mutant vampires?

It was a good 10 minutes before the woman said out loud "do as they do, unwrap the items and put it in your mouth. Blend in." The words "blend in" then changed my opinion to that they must be from a foreign country, that doesn't have fast food? Yeah. That's gotta be it. I quickly tried to rationalize their strange behavior.

As I was increasingly feeling very uncomfortable with where I was sitting and what I was seeing and hearing. I felt myself starting to feel out of place and started to feel unwell. As if I was viewing something I shouldn't and wasn't supposed to be looking at. It was one of the strangest feelings I have ever had in my life. After the woman spoke and in perfect English, without any kind of accent I might add, ALL three of them at the exact same time, with precise matching mannerisms, began to unwrap a corner of one hamburger. Then suddenly stopped mid-unwrap and acted like they heard something we did not. Heads tilted, in unison and then paused for at least a few seconds. The woman said as clear as day, "We must go, the mother ship is here. We must go now! We can not miss it" I frantically looked around to see if anyone else was seeing and hearing this? No. Everyone was too busy eating their frostys and fries! Oblivious to any of it. As if none of this was happening. But, I knew my sister had heard the exact same thing I did as she franticly tapped the table to get my attention.

I mouthed the words, "stay right here! I am getting mom!" As I stood up I made eye contact with my mom whom was on the other side of a partition a few rows away. I waved my arms like a crazy person. Signaling something is wrong! Come here! And she jumped up just as the 3 people stood up without speaking and walked out of Wendy's. I sounded like I was having a psychotic break as I tried to explain to her, "those people, they are aliens! She said the mother ship was here, look mom! They left all their food at the table!"

It was less than 30 seconds since they gone out the front door. I grabbed my mom's arm and we ran outside. All 3 were rounding the corner of the building. So we hustled, probably about 25 feet behind them. Except when we rounded the corner they were not there. No one was walking around, just cars driving in one direction. Turning the corner put us in the direction of on coming traffic from their drive through window. My mom was at a loss for words. She may not of heard what they said, but, she saw them disappear into thin air! And could make no sense of it. So where did they go?! Who were those people? What just happened? I don't know. I oddly looked towards the sky, of course I didn't see anything, but sky.

For years I thought my mom thought I was crazy, my sister didn't want to ever talk about it again. We since have spoken of it, but, not until we were both well into our 20's. The ride in that car, all the way to Texas no one spoke a word. My mom tried to explain all of it to my grandparents as we walked towards the car to leave. Neither one of them were having any of it. "I don't know who they were or what you saw, but, clearly they decided they were no longer hungry!" And with that, the conversation ended.

I have had many strange experiences in my life. But, this one is somewhere close to the top. I have contemplated over the years, if they were actors? Did this kind of stuff for reaction? But, no one else reacted at all. No one else even noticed them, but, us. I still don't know what to make of it. I don't. Some 34 years later, it still scarily hangs in my memory like it was yesterday." LH