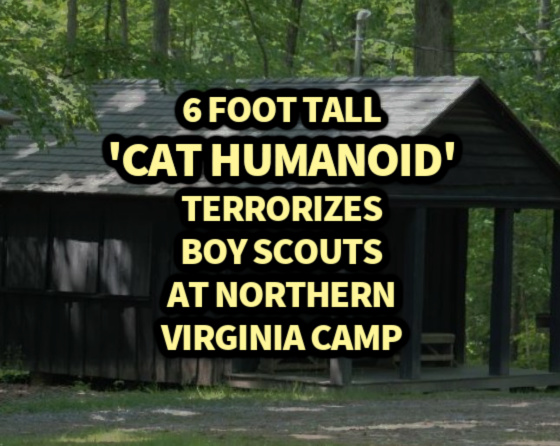 A group of Boy Scouts are in a camp in the Northern Virginia region. After the witness encounter, a 'cat humanoid' follows them to the cabin and terrorizes the group during the night.

"I have a story that happened to me and my friends. We were on a Boy Scout camping/shooting trip. There were 20-30 of us. We were in a little cabin with windows on the front and back, and a front and back door. There were wooden tables all around the area. The adult cabin (with the bathroom) was about an 8th of a mile down a gravel road in the dark. There was obviously a buddy system, because its Boy Scouts.

So, it's around midnight, and everyone had been telling scary stories, like normal camping trips. Well, I had to go to the bathroom, and asked my friend to come along. He said sure, and he got our knives (it made us feel safer). Well, we went to the bathroom, and began our walk back. This is where it got scary.

I felt an instinctual (not sure if that's the right word) fear. I look to my friend, and he had the same look as me. We begin to walk a little faster, and unfold our pocket knives. I then turn around, and see it. It looked similar to a cat, but it was 6 feet tall, and was on its hind legs, kind of hunched over. I freaked the heck out, and started running. My friend sees it to, and we sprint back to the cabin. It began making a moaning/howling noise (it was somewhere between the two), and followed us slowly. We pound on the door, and the guys let us in.

We tell them what we saw, and they actually believed us. So we lock the front door, and look at the back door. It had no lock. We pushed a table up against it, and had a kid there with his knife, for safety. We draw the blinds on all the windows that had them (one of them didn't), and we sat there, with all the lights on.

Then we see the eyes outside of the windows without blinds. We all are sh*tting ourselves, and the thing slowly walked to the back door. We heard it bumping up against it (maybe trying to open it, we think). It then left, but we still thought we were going to die. No one slept.

When the adults came to wake us up, we told them and they laughed and said we were making it up. We know it happened, even if they don't believe us. It was in Northern Virginia, about 60 miles east of Washington, DC. It was after 2012 (don't remember exact year).' D

NOTE: The Northern Virginia region has been known for unexplained humanoid sightings and encounters. I have reported on several in the past. Lon