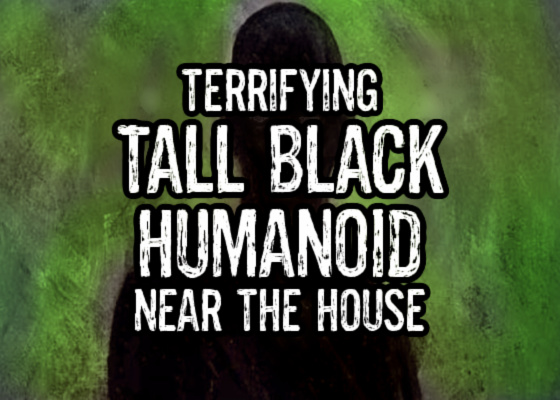 A young woman was at her friend's house when she encounters an unknown and terrifying tall black humanoid creature in the edge of the woods near the house.

"It started when I was staying with a friend one night and we were hanging out like the usual. Her father had come in because he thought he saw coyotes and was excited because they don’t normally get close to the house. We went outside quietly to check it out. He flashed his light towards it and all we could see were greenish eyes glowing looking towards us near the tree line, that’s all we could see. Since we thought it was a coyote her father had shot at we didn’t know if he had hit it or not but the eyes were still there. But after he had shot at it, it started moving its head in an unnatural way, kind of nodding side to side. We went to check it out to see if was injured and laying out there. We looked all around the area and saw nothing. We even drove around the woods to see if it had tried running away.

That wasn’t the last time I saw this creature. About a month or so later my friend had gotten sent away for a while. I’ve always been a close family friend so I decided to come up to her father's to stay for a couple days and check up on him. It was kind of early in the morning and a sunny day.

Her father had told me he was going to work and I would be in the house alone until he got back in the afternoon. So he left and I was hanging out in the living room playing on my phone, I left the door open since it was nice out. All of the sudden I felt the need to look out the window because I thought someone was outside. I opened the curtains and looked around. I then saw something out of the corner of my eye in the area we saw the “coyote” a while back. I looked in that direction and saw this terrifying human-like creature around the same spot on the edge of the trees. It was sort of kneeled down like a person looking directly at me. It was all black and very skinny. It had longish legs and arms and was a bit tall and had this wood and leaves looking cape thing on its back. It also did not seem to have any facial features from what I could see, just the facial structure and indents where the eyes should be. I was in shock staring at it. It’s like I couldn’t take my eyes off of this creature, trying to make sure I was actually seeing this anomaly and not my mind playing tricks on me. So I kept looking at it. All of the sudden it raised it hand up and it seemed like it was waving at me and it tilted its head to the side and started nodding it head just like what we thought what “coyote” did. After that I snapped back and stood up to run and close the door. When I got to the door someone was driving up to the house and the creature was no longer there. I then got the f*ck out of there.

Here is something else that had happened before both experiences that may or may not be related to this creature. One other night, while my friend and I were home alone, we were just chilling on our phones and my friend kept falling asleep. I was getting creeped out so I kept waking her up and then she started talking nonsense that her father was here and talking to her. I would snap her out of it and she would ask where he was, which she knew he left but was convinced he came back home. I sort of laughed about it and explained to her he hasn’t came back home yet. She seemed really tired but kept talking about him being there

All of the sudden we heard her father's voice from the hallway or another room. He says her name just like he would if he was there trying to get her attention or for her to come in there. We both heard it loud and clear, but no one else was home. After that we didn’t hear anything else for a while. After a little bit we still had our guards up because of what happened and we started hearing noises from outside which sounded like multiple people talking and laughing. It kind of sounded like her father and his friends. We were very scared by then and called her father to see when he would be home and to hurry up. He said he was on his way home. The voices calmed down and her father soon arrived." CA