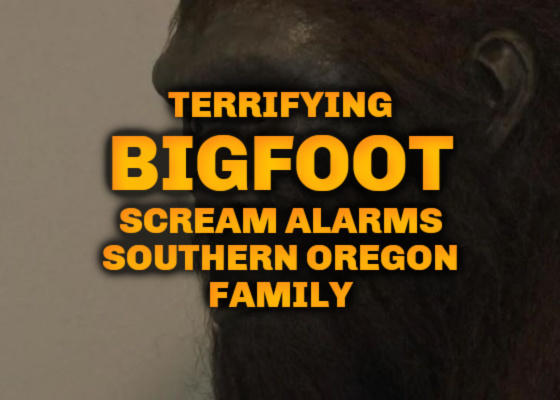 A man recalls hearing a terrifying scream while he was a boy living with his family in southern Oregon. He hears the same sound on the BFRO site 28 years later, and realizes that it was a Bigfoot.

"I have heard deer make some pretty strange noises, but never heard one make a hissing noise myself. I'm not saying they can't. I have heard some noises in the woods that I could not explain, but the one that scared me the most was when I was about 15 years old.

I had gone to bed about 11PM and was reading with all the lights off except a lamp beside my bed. At about 12 or 12:30AM I heard a faint noise coming from the creek bottom about 3/4 miles away. We rented a house on a 300-acre cattle farm in southern Oregon. The 300-acres was backed up to a 2000 acre timber company tract with no roads except logging trails. I had heard bobcats, cougar, and all other calls before as my older brother and I hunted those woods all the time. This noise or call was different. It would start with a low pitch moan or howl, then rise into a high pitch scream, and then end with a undulating cough or grunt. It's hard to explain because I had never heard it before or since. The ending sounded kind of like the ending of a elk bugle when the large bulls grunt, but not exactly.

It kept coming closer toward the house through the pasture and past the barns that were about 100 yards below the house. I had gotten up, loaded my 30-30 lever action and started up the hallway toward the front door. Now, I was already scared, but what happened next filled me with terror.

As I was walking by my parent's bedroom door which was open, my dad says, "son, stay in the house." I said "what is that noise?" He said, "I don't know. I never heard anything like it before." I froze in my tracks. I knew if my father was afraid of whatever it was. At that point, I wanted no part of it. (He was a WWII veteran, had hunted those same woods since he was a boy in the 1930s, had walked everywhere he went until he got a car after returning from the war night or day).

The noise, call or whatever it was was so loud it felt like the windows were vibrating. I listened as it passed by the house in a pine thicket, crossed the highway and faded out of hearing. The whole thing lasted about 10-15 minutes.

I had not heard anything even close to that until I found the BFRO site and listened to some of the so-called Bigfoot calls. They made my hair tingle on my neck and brought back that old memory from 28 years ago." R