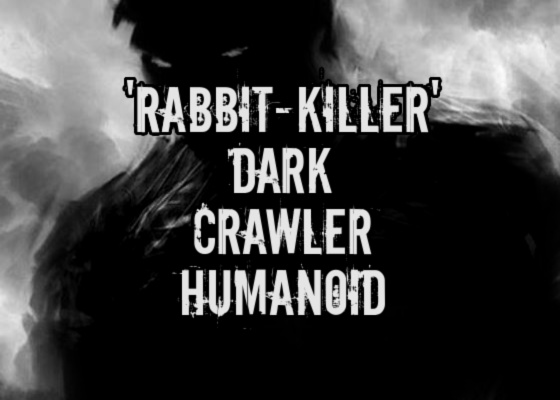 An unknown being has been killing rabbits and leaving carcasses on the porch. A camera caught a dark-clad entity crawling on the porch. Was this a crawler humanoid?

"I grew up in a very remote home located deep in the woods. I was home-schooled because there was no people for miles, much less a school. But it was great. My dad always took me out hunting and exploring in the woods, and my mother had a garden where she grew lots of vegetables & fruits in.

Well, the foods would attract animals, specifically rabbits. The thing was, every time a rabbit even appeared in our yard, the next day it would be dead. They always had their necks snapped and legs broke and were always placed along the small fence around the garden. I grew up with this.

One day, when I was eleven or twelve, I asked my parents about it. They told me that the week they moved into the house, they'd had one of those rabbits on the porch, and it just kept going. My mom thought it was some animal. But what animal breaks the bones and then just leaves it out? My dad figured they had a neighbor they didn't know about. But there were no houses nearby, so were they living in the woods somewhere? He left a note on the porch asking for them to not leave the rabbits on the porch, so the next time is when they appeared along the garden.

Over time we just got use to it, and would sometimes leave snacks on the porch that they would take. But one day my dad bought a camera, and set it up to try and see who was killing the rabbits. He left some snacks on the porch and pointed the camera towards it and went to sleep. When he woke up he found the snacks gone and quickly checked the camera. Oh my God, what he caught scares me to this day.

You could see a figure dressed in black run across the yard, crouch on the porch, shove the snacks into their mouth and then run off, all in under three minutes. The next day my dad found the camera on the porch, broke and with a dead rabbit. Apparently they didn't like being filmed. This was eleven years ago and to this day my parents still get rabbits, and the snacks are still taken by the figure.

-The Rabbits are always taken by the next day, we don't know what they do with them.

-We have told the closest law enforcement, but they found nothing when they searched.

-It's about one rabbit every month, sometimes two." US