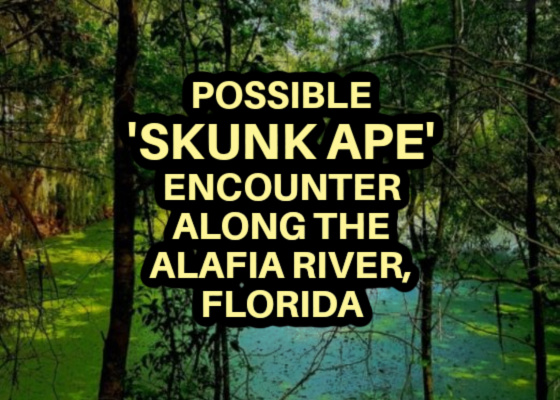 A group of friends are camping along the Alafia River in Hillsborough County, Florida. That night, they experience loud foot falls and crashing in the brush. Was it a 'Skunk Ape?'

"In the fall of 2011, I was primitive camping with a couple of friends of mine off the Alafia River here in Hillsborough County, Florida. We ate dinner and called it a night around 2300. At about 0300, I woke up to the sound of heavy footsteps coming down the trail towards our tent.

At first, I thought it was my buddy Jon trying to scare me, so I waited patiently for the scare to come. About five minutes pass, and the foot falls just continued to meander around our campsite. At this point, I figured he or the other guy we had with us just needed to use the latrine and could not go back to sleep, as this was not uncommon behavior on previous trips.

Well, about fifteen minutes pass and the steps continue, unabated. At this point, they have moved back up the trail and up a small ridge above our camp. This is when things got weird for me.

I heard the steps crashing through the underbrush, then a knocking sound started filling the air. It sounded like someone was smacking a baseball bat against a tree trunk, and it was accompanied by the most eerie moaning I have ever heard. The moaning sounded very human-like.

I had had enough at this point. I figured someone knew we were camped there and decided to mess with us (several groups of kayakers had come down the river earlier that day, and some were rowdy). I grabbed my sidearm and mag-lite, exiting my tent, and sought out the source of the commotion.

As soon as I got out of the tent and sounded the alarm to my fellow campers, the commotion began to swiftly move off deeper into the woods. We preformed a short range search of our area and found nothing.

When daylight came, I looked for any sign of tracks or evidence that someone was in our camp and found none aside from our own. My fellow campers heard the same sounds I did, but thought that it was me, as I thought it was them.

Another strange happening we all noticed was the lack of animal signs around our camp. We did not see so much as a squirrel (we intended to hunt rabbit) all three days of our trip until the hike back. Though across the river, we saw boar and other small game.

What are your thoughts on this? Was it a skunk ape? Keep in mind that we did not find anything to indicate intruders, human or otherwise." GS