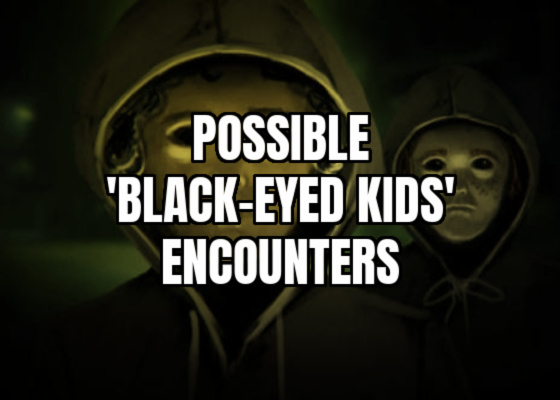 3 different accounts that detail possible black-eyed kid encounters. Have you ever had a similar experience? Please feel free to forward to me.

"This happened a couple years ago. My husband and I were up late worrying about our dog, she puked red and we thought she wasn't feeling well. Turns out she had jumped on the dining room table and ate some of my roses I had in a vase so she ended up being fine. But husband and I were worried and hadn't realized she ate the roses yet, so we decided to go to the vet. It was about 10 or 11 PM.

When we step outside the door we look to our left at the cul-de-sac that's next to the neighborhood. It's an empty road except for one house, an old man and his dog live in, and a crossfit gym. In the middle of the cul-de-sac there's this little girl, maybe 4 or 5, riding an old metal tricycle in a circle. The tricycle was making this constant 'squeak, squeak' sound so that itself was pretty creepy. There was something off about it. The way she was riding the tricycle it just didn't seem right. My husband and I both remember her being under some kind of light but there's no street light where she was at. I felt creeped out, but more confused and worried than anything! My husband pulled me away and said 'we gotta go.' He was pretty freaked out by her. I didn't really get a good look at her eyes.

When my husband pulled me away the squeaking stopped and I thought I heard her say "mommy?" I don't really remember well. Everything happened pretty fast, but I think I glanced back after she stopped peddling and as my husband was pulling me away and there was something weird about her face to. I vaguely remember thinking her eyes were black but I didn't get a good look and I also didn't know at all about BEK. I just learned about BEKs recently. Does anyone think this may have been a BEK?"

"I had this really strange experience last year and my brother just told me about BEK and I feel like that’s what I saw. So last year during Christmas time, my sister and I were having a hard emotional night and we decided to go around looking at Christmas lights. I was driving, and we were just crying, and talking, and looking at the decorations. There was a meteor shower that night, and we ended up on this super creepy back road with nothing around. No houses or buildings, no street lights, just woods. Somehow we both saw a meteor falling in the sky as I was driving, and we both screamed with shock and excitement!

As we looked back down onto the road there was a small child on the side of the road. It had a backpack and was just staring at the car with this insanely scary grimace on its face with huge black sunken in eyes. It didn’t move its body, but it’s head was moving with the car as we drove past. We freaked the hell out, screaming and crying and just in utter shock of “what the hell was that?” It filled us with such terror and we were both so distraught and upset. We couldn’t stop shaking and crying and we couldn’t rid ourselves of this horrible feeling. I felt guilty for not stopping if it was someone that needed help, but it was the middle of winter, late at night, NOTHING was around that road and there was no reason for someone to be there. And they weren’t trying to flag us down for help, just staring.

We called the cops and went home and couldn’t sleep all night. I still have PTSD when I drive at night. I drew a picture when I got home so I’d never forget what it looked like." TO

"I was a Peace Corps volunteer in Nepal. I lived in a small and remote village. One night I woke up and thought I heard something at my door. I got up, cracked the door, and I saw nothing there. I thought perhaps it was a deer or a porcupine. But, there was nothing. I closed the door turned around got back into bed. The SECOND I turned around I saw a child…black outline, white face, black hair, and deep black eyes. I laid there stunned, I quickly pulled the covers over my face. The moment I did that I woke up. It was a dream. The same night sequence in the dream was reality, it was freaky. It felt SO real. I can remember that boy’s outline and eyes.

A week or so later my host father unexpectedly passed away. It was devastating to the family and entire community. For a long time, I thought my dream was a bad omen. At times, I try to think it wasn’t related at all.

It was weird timing and it scared/scares me." Z