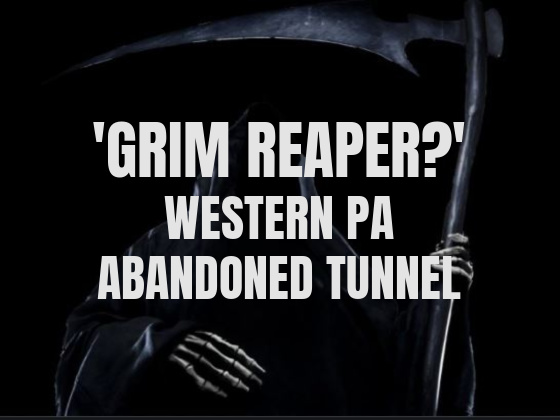 A group of kids in western Pennsylvania stumble across, what they believed was, the Grim Reaper near an abandoned tunnel. Turns out that it was a bizarre mangled tree that took this strange shape.

"When I was a kid growing up in western Pennsylvania, there was an old abandoned railroad in the woods near my house. The railroad went through a valley with a pretty large, winding creek. There were several cuts and tunnels through the hills of the ravines and valley on either side of the creek. I'm pretty sure this railroad closed down in the early 1900's, and by the '1980s it was overgrown with the tunnels in a pretty advanced degree of collapse and looked more like natural caves.

Needless to say, this was a perfect area for playing and exploring the woods for a kid (from a kid's perspective - pretty sure most parents wouldn't want their 11 year olds exploring abandoned railroad tunnels).

One year we had an exceptionally warm December and I had a few friends staying over my house for Christmas break. Of course I wanted to take them down to the railroad tunnels. I probably hadn't been down there since summer.

As we are approaching one of the tunnels, we get stopped dead in our tracks. In front of a tunnel we see this gray, skeletal figure holding a scythe. We take off running back the direction we came. My neighborhood was about a half-mile to a mile away, mostly uphill, and we come bursting out of the woods breathless in one of my neighbor's back yards. He's out doing yardwork, and obviously is curious as to what we were up to.

We tell him what we saw, so he assures us we did not indeed see the Grim Reaper, and offers to go back into the woods with us. So we all go trekking back down to the creek with my neighbor.

We come to the tunnel and sure enough, there he is. Skeletal figure, grey, wearing a black cloak, a distorted, twisted body and holding up his scythe, which looks like it is an extension of one of his arms. He is just standing there, motionless, silently, guarding the mouth of the tunnel. My neighbor motions for us to hide, and he and the Grim Reaper have a stare down which seems to last forever. The neighbor starts laughing, to the degree of tears coming out of his eyes and he has to sit down, and tells us to come out and see.

It was a tree that was hit by lightning. The trunk basically exploded. The bark from the tree was still attached in places that appeared to be his cloak, and the twisted, exposed portions of the trunk appeared to be his body, head, arm, and scythe. It probably happened a few months prior and the exposed trunk wood had weathered gray already. Even now knowing what caused it, it still was super freaky to look at, and still made us nervous, so we were happy to leave. This thing was so perfect it almost looked like someone had carved it with a chainsaw, but the wood was too rough and split for that to have been the case, and it was a completely natural phenomena.

A few months later, I returned with a camera and some other friends to show them the Grim Reaper in the woods, but it was completely gone. I could not even find remnants of the trunk or root system from the tree - just vanished.

It may be of note that we would often find satanic graffiti in the railroad tunnels - pentagrams and such spray painted on the stone cliffs and walls in and around the tunnel. It also appeared that lots of people had used the tunnels to have parties, get high, etc. as we would sometimes find syringes and burnt spoons and the likes. I probably haven't been back down to check the area out in 20+ years, but keep telling myself that one day when I'm home to visit I'm going to take a trek back in the woods to see how things are holding up." NC