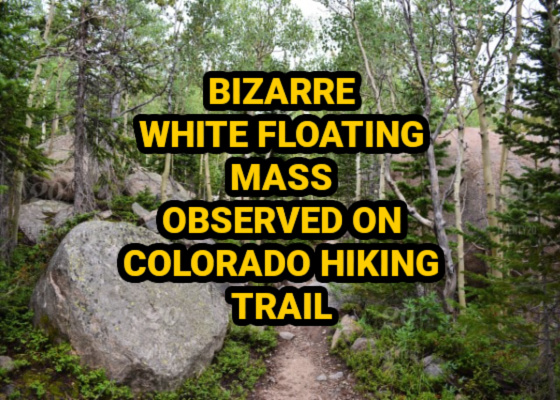 A couple encounters a bizarre white blurry 'mass' along a state park hiking trial in Colorado. They are unsure of what they observed and ask for information.

"I am not very well versed in the paranormal. I am pretty experienced with hiking and the outdoors. I have spent a lot of time hiking and camping in both Colorado and the White Mountains, as well as some hiking abroad in Morocco, Iceland, Switzerland and a few other locations abroad. I am very comfortable outdoors and in the woods, and I like to think of myself as a pretty level headed hiker. That being said, something happened this week that neither I or my boyfriend have been able to explain.

We took our dog out for a walk at a state forest close to our home in Colorado. We arrived at around 4:30 PM, which is unfortunately dusk in our area at this time of year. We figured, “no problem, well-marked trails and a populated area.” We had just gotten out of the car, gotten our dog leashed up, and had started up a paved trail onto the path.

We had only been walking for about two minutes when I got an unmistakable, alarming feeling. I have never felt this in all of my years spent in the outdoors, and I immediately felt as if something was watching us.

We have a very alert, very active dog who can hear a squirrel from quite a distance. He didn’t look alarmed and wasn’t acting out of the norm, so I tried to brush the feeling off. But only a moment later, I looked up and saw something that I have absolutely no explanation for.

About 20 yards ahead of us, I saw a white mass floating between two trees. It was floating about four feet off the ground. I physically could not wrap my head around what I was looking at. It was almost shaped like a band-aid (I have no idea how else to describe it). It was staticky and not quite a solid shape. It was about 1.5 to 2 feet tall from top of bottom. I have great vision, but the mass was blurry and kind of twisting and spinning in place. I tried to focus on it but I just couldn’t get a clear vision of what it was, despite still having some sunlight to work with.

I grabbed my boyfriend and immediately pulled him towards me and pointed, and said “what the fuck is that?” I think this was the first time in my life that I felt fight or flight kick in at full capacity.

He laughed and thought that I was messing with him, but it quickly became clear that I wasn’t. He turned to look, and just as he did the mass floated to the right and ducked behind a tree.

We stood and watched for a moment. The mass floated from behind one tree to another, and it was almost like it was peering out and looking back at us. My boyfriend equated it to playing hide and seek with a child, who is poorly hidden but peeks around a corner to see if you can see them.

It made a few more bizarre, floating movements before it disappeared. We stood there for a minute or so, waiting to see if it would reappear, and trying to rationalize what we had just seen. We did move a bit closer, just to confirm that there was no trash or any debris in the area that we could have been looking at and there was not. We headed back to the car and called it a day after that.

It has been a few days since this happened, and we still have absolutely no idea what we could have just seen. We are not huge believers in the paranormal, but I’ve been digging through some paranormal sites this evening to try and find out what we were looking at.

We know that it was not a human or an animal, and have not been able to find any other explanation for what the hell we could have just seen. Would love to hear if anyone has any ideas or has had a similar experience to ours.

Also from my reading on these subreddits this evening I do want to preface with some obvious lol! We were both well rested, sober and do not use any type of drugs or take any medications." TK