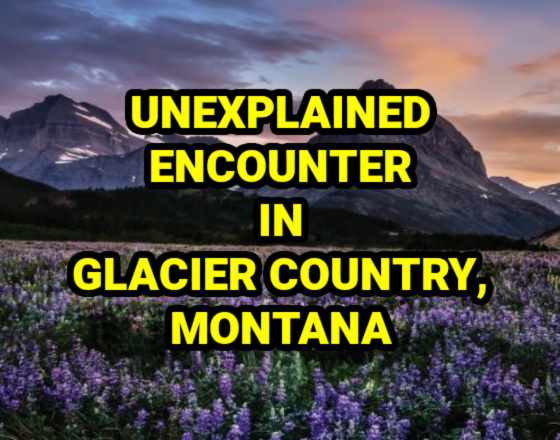 A Montana man and his son were fishing & camping in Glacier Country. Later that night, something startled the father, so bad that he knew that it was time to leave.

"Back in the day, me and the oldest son took off to a lake in the wilds of Glacier Country in Montana. I have extensive backcountry exposure, even did a stint as a big game guide in a remote backcountry camp. On this day we enjoyed the fishing and settled in for the night.

I pulled out my pan and stoked up a nice fire. It was clear and cool as the sun faded into the western slopes. We cooked up some fresh rainbows with garlic and butter and filled our stomachs. I leaned back against the cooler after pulling out a refreshing beverage. The boy was soon asleep by the fire as it had been a busy day. I sipped my beer and watched the moon light bouncing off the little waves in the lake. There was still a light glow on the western horizon where the sun had gone down and I could see the outline of the mountain peaks towering over the little lake. I slowly faded off to sleep with the sound of the lake waves gently lapping on the rocks.

I awoke with a start. The fire was out, the lantern was out too. The moon was gone and it was pitch black. Something was wrong. The hair on the back of my neck stood straight out. I was paralyzed. I could hear my heart thumping as I strained to hear something in the bush, all was quiet. I had a horrible uneasy feeling. I gathered myself together and started kicking around the fire, a small flame came alive and I quickly threw on some wood. In the firelight I could see that the boy had awoke and was shocked to see his wide open eyes staring at me. "What's wrong?" he asked. "Nothing, go climb in the tent." I lied. He crawled into the tent but even in the light of fire I couldn't shake my wariness. Something was out there in the bush, and I could feel it was watching me.

I gathered up my light and flashed around camp. Nothing. Finally, I began to calm down and crawled in the tent with the boy. Then again, like clockwork, I awoke completely tense. This time I couldn't shake the feeling at all. I finally instructed the boy to wake up and go get in the truck. I packed up all of camp and drove around to the other side of the lake and slept with him in the truck.

At dawn, I got up and looked across the lake where we were camped earlier, and another uneasy feeling came over me. I decided it was time to go home. I don't know what was out there, or what was going on over there, but I know my instincts, and something was bad wrong with that place. Whatever it was, I will leave it to your imagination, it creeps me out to this day thinking about that night." MT