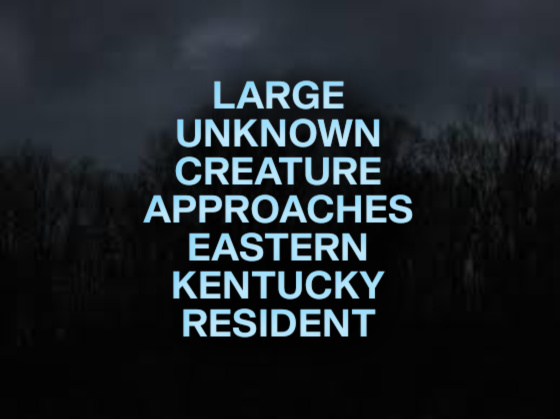 A eastern Kentucky resident encounters an large unknown creature with eyeshine while filling a squirrel feeder on the slope behind his house. What do you believe it was?

"When I was a teen my parents used to take me and my older sister to my relatives house in eastern Kentucky, around Letcher County. The closest city is Whitesburg. My uncle (who taught me everything I know about the outdoors) lived in a cabin nestled in a holler way back up in the mountains. His place was at the base of a big strip mine seam up on the mountain side. He and I used to go sit out on his back porch at night and use predator calls to try and call something down out of the hills.

Well, one night, he and I were out there using one of his tapes. We'd been out there for a good 2 hours and seen nothing so we were thinking of calling it a night. We were about to pack everything up when he realized his squirrel feeder was empty. He then decided to go fill it back up with seed. His feeder was about 50 yards away from his cabin on the mountain side and bordered the tree line.

He walked up the hillside about 25 yards when my aunt came out to see why we were still outside. The only light out that night was the light from his porch. He was about 35 yards up the hill and he called back and said he forgot his flashlight my aunt went back inside and got one of his spotlights. We had forgot to turn off the tape with the predator calls, so I reached down to the tape player to turn it off. Then I noticed my aunt was as stiff as a board. I hit the off button and looked up at her and she had the spotlight shining straight up to the squirrel feeder where my uncle was at. I heard her say "It's coming to you Jim." Jim is my uncle's name. He turned back and goes "huh?" Then a little louder that time she goes "It is coming straight towards you Jim." That's when I looked up and saw a set of eye shines about 15 feet away from where my uncle was standing and closing in. Whatever it was it was massive. The eyes were about 4-5 foot off the ground. Also, whatever that creature was completely and totally got the drop on my uncle who has pretty much spent his whole life in the woods studying and tracking predators.

Well, he was turned around looking at us with his back to the woods so we told him to freeze. We all just kind of stood there for about 3 minutes which seemed like a lifetime. It was dead silent, no crickets, no sounds of the night. It was the most eerie and creepy 3 minutes of my life. It just sat there at the tree line staring at us all and us staring right back at it. The brush at the tree line was thick so we could not see what shape it was...just the eyes and where they were in relation to the ground.

After those three minutes my uncle slowly turned around to see what was about 15 feet away from him. With our spotlight on it, as he was about to turn and look it directly in the eyes, it split. And for the next 15 minutes we could hear limbs cracking and snapping all the way up the side of the mountain as this animal decided to retreat. Scared the sh*t out of me, and my uncle...literally. My uncle pissed himself. I think that was the thing that scared me the most about it was that he was so scared. He was shaking and I had never seen him like that. The other thing that scared us both is that we had been sitting out there all night listening intently and watching that tree line like hawks. Whatever animal or creature it was did not make a single sound coming down the side of that mountain. It never made a sound until it took off. I didn't sleep that night and neither did my aunt or uncle." GS