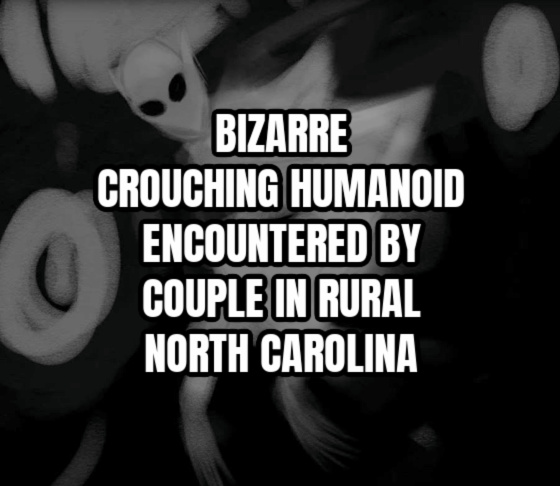 A North Carolina couple encounter an unknown humanoid outside of their apartment one evening. It was crouched down near their vehicle, in an attempt to hide from them.

"This incident involves myself (25M, then 20) and my girlfriend (23F, then 18) in a small rural town in central North Carolina. I was living with a friend at the time as I had nowhere to really go. My girlfriend typically stayed the night with me as we had an entire basement bedroom to ourselves and he didn't really mind as we were all close and still are to this day. I was a pretty heavy smoker at the time and went outside to take my habit away from the house to which my girlfriend would follow to partake as well, So like any other time that my nicotine craving set in, I would grab my lighter from the bedside table and go to head out into his driveway.

For context on this place, my friend lived around some forests, country roads, and several farms. He had a pretty sizeable yard in front of the road which lead into the some dense trees. The only place really open around those parts was a gas station you could walk down to in about five minutes. Anything else was a good fifteen-twenty minutes away.

Anyways, as I head outside, my girlfriend behind me, her and I are having pretty light-hearted conversation, inside jokes and what not. Something catches my eye near my vehicle which was parked under his old oak tree near the center of his yard in the driveway. I'm sure everyone knows the feeling of trying to focus on something that you feel isn't supposed to be there so you tune everything else out around you. Well, that's what was going on. Beside my car, there was something crouched down, akin to how a cat or a dog would sit. It was about 11pm so it was dark and the porch light wasn't reaching far enough to get it, but this is what I could make out. 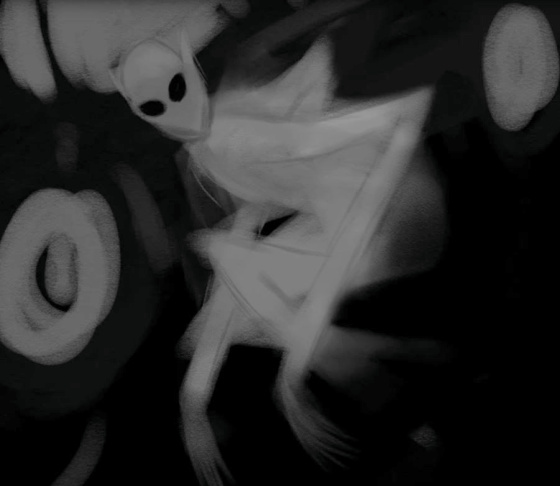 It had long arms that, despite being in front of it, the elbows pointed back behind it. There was no visible hair that I could see with a large, bulbous head and it looked to have what I'm guessing could be pointed ears judging from the silhouette of the thing. I'm not entirely sure about the size as I was still a distance away and it was crouched down beside my vehicle, but it looked like if it stood up it could be about my height and I'm six-one. As soon as I started to piece together what I was staring at, I realized my girlfriend had begun questioning me, calling out my name and walking to my side. Instinctively, I blocked her way with my arm and told her to get back inside as I continued staring at this thing which made no effort to turn and look at us and remained unmoving. She gave a sort of laugh assuming I was messing with her, which isn't unlike me, until she began trying to look at what I was so focused on.

She catches sight of it and I remember her asking me, "What is that?" I had no words to answer her, but this confirmed that what I was seeing was entirely real. In a panic we both start backing towards the door, still garnering no reaction from the thing at my car until we are at the door, fumbling for the knob and then finally getting inside. After we're inside, she asks again what that was, I still had no idea. After we head back down to the basement, she decides to sketch what she seen so I can get a look at it and that we can line up exactly what she saw. A few minutes later, I'm looking at it again on paper. A bulbous head, long arms with the elbows arched behind it, crouched down, and pointed protrusions we are both assuming were ears.

It has been a good five years since then and we moved out into our own apartment. My girlfriend has sketch an image," MG