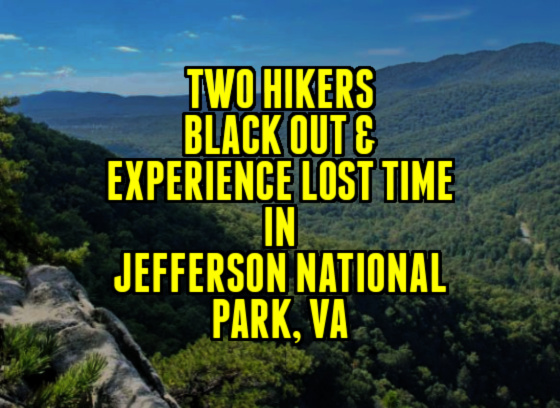 Two hikers in the Jefferson National Forest in Virginia experience a strange sensation, along with a loud 'metal on metal' sound. They black out, then awake 2 hours later in their vehicle.

"My partner and I are avid hikers. One July we went on a trip and decided to camp at this spot we love just west of the Shenandoah National Forest. It's quiet, off the beaten path, and offers absolutely spectacular views of both Shenandoah and portions of George Washington National Forest to the west.

The first day and evening of trip itself were nice and uneventful, though we didn't sleep super well because of the humidity. The next morning we decided to go for a hike in a portion of Jefferson National Forest we'd never been to before. It's comprised of ATV trails and about a dozen campsites, but has a trail that leads to an old fire tower we'd always wanted to check out. It was about a 45 minute drive from our campsite, mostly on backroads.

When we got there the first thing that stuck out to us was how empty the campsites were. We actually didn't camp there the night before because we'd heard that the site is usually packed and we knew we wouldn't arrive early enough in the weekend to get a spot. There were only two spots taken. In one was a desiccated tent and a bunch of garbage, it looked like someone had been there for a while, but it was deserted when we arrived. In the other, there was a young woman, I'm guessing in her late teens, setting up a small backpacking tent. There was a truck and one other smaller car in the parking area.

We parked and started getting our gear together, and the woman approached us to ask if we knew where the trailhead was. I told her that we'd read that it branched off about 100 yards into one of the ATV tracks but we weren't 100% sure which. Since I was getting such weird vibes from the place, I kind of hoped she'd stick around and go with us to find it, but she just thanked us and took off in the general direction of the trail.

We set off and walked up and down a few of the ATV trails until we found the walking path. We saw two ATVs shoot by us at one point but otherwise didn't encounter anyone else, including the woman from earlier. It took us about an hour to get to the top of the mountain where the fire tower was. It's an old metal structure and you have to climb a narrow set of stairs to get to the top of it. We got up, looked around, took some pictures and started heading down (honestly the view was kind of a let-down).

About halfway down, very suddenly, everything stopped, the birds and the bugs, it was dead silent. And I don't know quite how to put this into words, but it felt like the ancientness of the forest was contorting and crushing us. I felt trapped and cornered in spite of the expanse around us. My partner and I looked at each other and wordlessly started to book it out of there.

We started running back to the car but the feeling only followed us. As we were rounding one of the switchbacks we heard this unearthly shriek, like a cross between metal on metal and a choir screaming off-key. And we saw something. I just got a glimpse of it before we blacked out. I don't know how to describe it other than it looked huge despite clearly not taking up much physical space and moved in writhes and flashes. It didn't have a color, it just felt like evil and emptiness. I probably only perceived it for half a second before my memory just completely gave way.

When we came to we were sitting in the car and two hours had passed, double the length of time it took us to get up there. I don't know if I we lost consciousness or just somehow blocked those hours out (I learned later the exact same thing had happened to my partner). Both of the cars were next to us in the parking lot, and there were still just the two tents at the campsite. The woman wasn't in hers, and it looked exactly the same as she'd left it. I think about her all the time, and have spent a ton of time trying to figure out if someone went missing around the time of our trip.

It took a few months for my partner and I to talk about that day. We still love to hike but honestly haven't been able to in Appalachian forests since this happened. I'm curious if others have had other experiences like this." CM

NOTE: Once again, these National Forests and Parks along the Appalachian Mountains produce a lot of anomalous activity reports.

This particular account sounds very similar to a few reports that I have received over the years near the Brown Mountains in North Carolina. Besides the continuous light anomalies, there have also been loud otherworldly bellowing sounds that seem to emanate from the sky. Several experiencers have expressed lost time, but nothing more than that. Lon