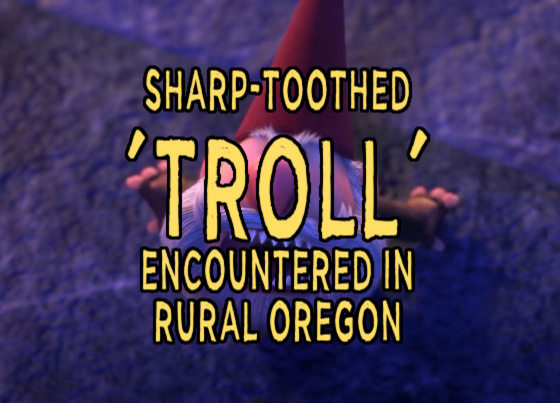 A pair of friends are driving along in rural Oregon when a troll-like being, with sharp teeth and a red hat, crosses the road in front of them. Any ideas what this could have been?

"About 20 or so years ago, I was driving down a pass in Oregon. It is just outside my town in the foothills, and has farms all around. Most of the night traffic is delivery trucks avoiding tolls.

There is a little field off the road I discovered. Since it’s outside of town, it’s perfect for stargazing, and the grass in the summer covers you. I’d bring friends up there to look at the stars and talk about deep subjects.

When this incident took place, I was bringing a new friend to my field. He was the ultimate skeptic, didn’t believe in anything unless it could be demonstrated scientifically, end of story. I am a bit more flexible, so discussions with him were quite engaging and enjoyable. It was late at night, and the road was curvy. Just before reaching my field, we came around a bend and something darted in front of my car.

It was about the size of a chimpanzee, and was running using its front arms as a chimpanzee would. When it ran in front of my car, it reared up, and I saw a grimacing mouth full of sharp teeth.

Now, it wouldn’t be out of the realm of possibility that this was a chimp. I live near a primate testing facility and there have been two escapes in my lifetime. But what was just wrong, what truly broke me was that this creature was wearing a backpack and a hat. A red hat. A pointy, red hat. My mind froze on that hat and short circuited.

It dove into the bushes on the other side of the road, heading in the direction of a house. I slammed my breaks and put the car in reverse. Before I could back up, my stoic, scientific, calm friend screamed at me, “What are you doing?!” To which I replied “I’m going after it.” He locked his door, leaned over and locked mine, and told me to drive. Still considering him, I asked what he thought he had just seen. “I don't know! A gnome or troll! Something! Just go!”

I was satisfied enough that my friend had seen something that shocked him to his core enough to shake his beliefs, and we drove on. We never spoke of it again.

I thought of it at the time as a Kobold, as it resembled the descriptions of Kobolds in the Magic Kingdom books. But it wasn’t a Kobold. It wasn’t until many, many years later that I came across the description of a south-East Asian mythological creature (I’ve forgotten the name of it so if anyone has knowledge there I would appreciate it) which matched it exactly. The funny thing is, we have a heavy Asian population in that area, so it oddly makes sense.

I haven’t seen anything like this since, though I look every time I drive by that spot." JH