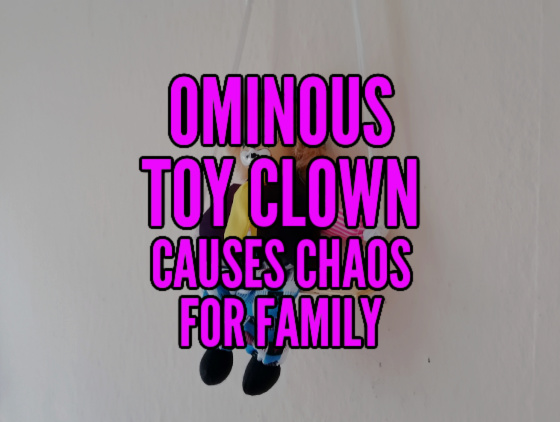 A young girl feels discomfort from a toy clown that was given as a gift. Sleep problems and other unexplained incidents eventually prompted its removal. Was this object haunted / possessed?

My mom’s friend gave us a gift on the Valentine’s Day. It was a wall decoration; a clown sitting on a wooden swing. The clown body was made of cloth and his head was ceramic. In general, he looked cute, so we didn’t mind putting it on a wall. In the end, it was a gift and we wouldn’t just throw it away. I wasn’t afraid of clowns (at that point of time).

Our apartment was basically a one room apartment with a separate kitchen. My parents just came together again, so we all slept in one room which was also a TV room. The clown was right above my bed.

Things started to get weird right away. I felt being observed in that room and in the whole apartment. I was uncomfortable. I started to have sleeping problems - a lot of nightmares, and they were violent. I was not a fan of horror movies and I did not consume scary content. This uncomfortable living continued, and once I woke up at night and immediately felt being watched. My dog was sleeping with me in a bed frequently, and I looked at her - she was looking up - at the clown. I freaked out. I started to pet her and she completely ignored me. I was poking her and got zero reaction - as if she was hypnotized. At some point she “came back,” I hugged her and couldn’t sleep rest of the night. I didn’t talk to my parents about the clown because it bothered only me, and I thought it’s in my head.

Next morning I decided I had enough and before school I talked to the clown. I said that I hate him and I will throw him away if he doesn’t stop. That was sort of a power moment, on the back of my mind I laughed at myself for believing in this bullshit.

That day my mom told me that she needs to go to the train station and meet her friend who will overnight at our place. My dad was on a business trip. So I had to stay home alone between after school until around 8pm.

I was, of course scared, but it was going well while it was a daylight. I watched cartoons and some teenage series. The sun started to go down...and I thought I need to turn on the light. I reached out to the lamp and it didn’t work. The switch did not work. I decided to turn on the light in a corridor then. Again, the switch didn’t work. I though I will die from my heart racing like crazy. I was scared to go to the kitchen, I was paralyzed by fear. I thought to myself - I will just sit on a sofa, watch TV and nothing will happen to me. Same second, I see with my peripheral vision, that one of the clown’s leg sort of moved and slightly bounced against the wall. I told myself I am just too scared and there was nothing wrong, it’s my imagination. It’s just a toy.

What happened next, I have no idea, It’s a complete blackout for me.

According to my mom, she came back home with her friend and called the doorbell (I had key inserted, so they couldn’t come in). I didn’t open. They called on the home phone and I didn’t pick up. They went down to ask the concierge if she saw something. The dog was barking like crazy and they could hear it through the 2 entrance doors. There was a light in the room which they could see from the balcony. They say it lasted for about 30 minutes before they called emergency to break into apartment and around 10 minutes for them to arrive and break into.

Lastly, I sort of woke up as my dog was poking me with her cold nose in my face and hands. All I remember is that there was light everywhere, dog was jumping on me and barking, the phone was ringing constantly and people were knocking on the door screaming my name. It was a chaos. Another thing, I was lying on a pillow under the blanket as if I went to sleep. When I opened the door my mom and her friend were hysterically crying. They thought I’m dead or something. I told that I was watching TV and I probably felt asleep so deep that I didn’t hear anything.

It was around 10 PM after we ate and prepared for bed. I slept in a bed with my mom and her friend. I didn’t tell them anything about the clown because I was just so stressed about the whole thing. In the morning her friend told us that she felt very uncomfortable and couldn’t fall asleep because she felt 'being observed,' then she pointed at the clown and said it was creepy. That’s when I told them that the last thing I remember is the clown’s leg moving before I passed out. I guess we all got horrible chills.

Next morning, I went to school, my mom threw away that clown far away from our area. It would have been great if she told me about this beforehand, because when I came from school and didn’t see the toy I started to spin around thinking this thing is standing behind me with a knife. When I realized it’s just not there anymore I sat near the open entrance doors and waited for adults to come back from work.

This is the story. Other weird things happened in that apartment too." K