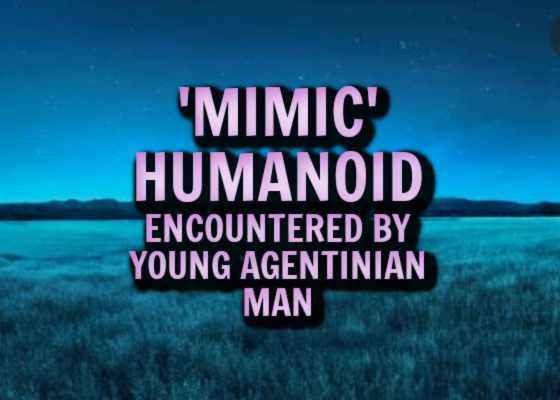 A young Argentinian man is visiting his grandparents in Huachana. One night, he observes several people drumming and chanting in the field. The next night he encounters a 'mimic' of his grandfather.

"My family is from Santiago del Estero, Argentina (north of the country). From time to time we would go to see them. Once, when I was about 18 years old, we stayed to sleep in my grandfather's field. It was summer and there is very hot all year, unable to sleep and bored. I went out for a walk (there is no one in that area, it is a place called Huachana).

There are only a few neighbors with whom I have never dealt.

In one of those night walks, in a field of some neighbors, I saw people with some drums. There was no fire or anything, they were only illuminated by the light of the moon, without making more than some noises with their mouth. I did not give them much importance. My grandfather used to wake up to 4 AM to make cake on the grill and have “mates”, so I assimilated that in that case it was a similar situation. So, I kept walking. They stared at me. Not knowing what to do I nodded to greet them, They don't even flinch, they keep looking at me and stop with the drum and making those sounds with their mouths. The incident, which must have been about 5 minutes or so, really freaked me out. I started to get scared and decided to go back to my grandfather's house. But I did not want them to know that I am scared. So, I walked around the field, and when I got out of his sight, I started jogging.

I arrived at my grandfather's house and I could not sleep at all. My grandfather wakes up very early as usual, so I decide to tell him everything that happened (I want to clarify that my grandparents are devout Catholics). My grandfather told me never to pass that way again, and if I see that they are doing something, do not even look at them. Also, that if they ever offer me something, just reject it immediately,

Now comes the strong part of the story and that it will seem invented, but I swear it was like that and I cannot find an explanation. Also, I want to clarify, I was neither drugged or drunk.

The next night I couldn't sleep. I kept thinking about the neighbors, and out of nowhere I hear noises outside the house. I thought it was the animals that were making a mess, so I'm going to see. When I walk outside I see a familiar human figure. It was my grandfather, telling me that he needs help, and he needed me to accompany him. He was going to my neighbors' field.

At that moment I felt a chill and enormous fear, I rejected him and went back to the house. Inside the house I felt safe and with more reason, I decide to go to my grandmother's bedroom to ask her what my grandfather wanted to do. But I found something that made me not be able to sleep almost at all in the next few nights that I was there. My grandfather was sleeping as quietly as possible. It was impossible that it was he who called me. Until today, I keep thinking about what happened." JM