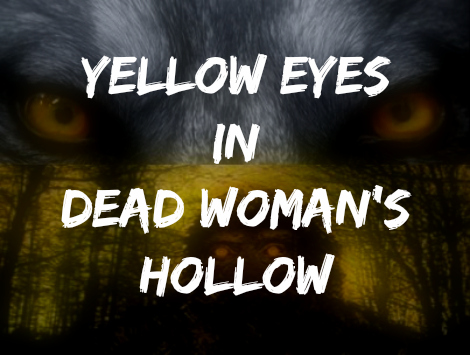 I received the following account in November 2015. Was it Bigfoot? Possibly another bi-pedal or upright canine canine sighting in Pennsylvania? Michaux State Forest has a lot of unexplained activity.

"Just came across your site and listened to the Arcane Radio episode about the need for people to submit info for your investigations. Let me start by saying I have no desire to experience any anomaly but for whatever reason, seem to draw them, much to my dismay. This is the 1st time I have spoken to anyone outside of family. Here is my encounter:

My husband and I began sitting around a fire pit at my sister’s cabin shortly before dusk. There was no one else present the entire time. As always, we were both armed. We also had a spotlight and were about 20 ft from the front door of the cabin. We both have been avid outdoor people all our lives with many, many hours hunting various wildlife, trapping, fishing, camping, canoeing and hiking.

My husband began playing around yelling weird sounds to get a reaction out of me because I was nervous for the first time out of all the times I had been there for some reason. To our surprise, something answered him from, I want to say, within 100 yards in the woods, with the same sounds he made. He stopped and we sat silently looking and listening for what it was. No more joking around.

The yells, probably 5 in total, came closer over the course of a few hours, until the last one heard was clearly within 40 yards of us. It was with that I decided to go inside. I had been shining the spotlight intermittently throughout the evening into the woods and thought I would do so one last time as we both walked towards the cabin.

That’s when I saw something for the first time...yellow eyes. It did not look away or blink, but remained staring back at me from the area the last yell came from. I tried to see its body but everything else was dark around it. When I said “I see eye shine!” to my husband, the eyes moved several feet sideways, staring at me the whole time, then disappeared completely. I have spotlighted deer and various animals and this was not the same. They were at least twice the size of a deer’s eyes and there was no indication it had turned it’s head or walked away, but instead gave the impression of stepping behind something.

Once inside the cabin, we retired for the night with the bed having been positioned directly under a window that was left open for ventilation. My husband slept undisturbed throughout the night. I, however, heard what sounded like wood chops 6 different times. I clearly heard a loud “crack” close by, also.

The next morning, I walked to the area of the last vocalization / eye shine down a path. I found the biggest tree in the area about 5 feet off the path. It was too big to put my arms around. I noticed a clear line from the tree to the path of disturbed leaves, as if something walked to the tree then returned the same way. None of the other leaves around were disturbed except the line continuing across the path in the opposite direction into thick cover. I also found a freshly broken tree limb, approx. 10" diameter and about 4' long, lying in the path, all of this within 10 square feet. It appeared to have come from a live tree nearby and had been broken off several feet above my head.

I had every intention on investigating the scene even more but frankly, lost my wit (which is not like me) and returned to the fire pit to tidy up. I knew all this was abnormal and didn't feel right. That’s when the most frightening thing happened.

My attention was brought back to the big tree by really loud sounds of something BIG moving FAST towards me from the cover where the line of disturbed leaves were. I saw the foliage moving closer as I ran inside the cabin. I am sure I couldn’t have been but a second or two away from seeing it burst out into plain view, which is exactly what I did not want!

So what I would like to know is...what mimics people's voice, has large eyes that shine yellow at night, hides behind big trees, makes wood chopping sounds, breaks big limbs off of live trees and charges at people in broad daylight?

Thank you for your time and consideration of this email. I hope you find it helpful information somehow." DA

NOTE: So where do I start? Well, this area has the Appalachian Trail traversing through it and there was a murder near there - Dead Woman's Hollow - Rebecca Wight. But it actually got its name from the fact that a woman, whose identity is no longer known, was bitten by a snake and died there. After she was found the natives referred to this area and the road as the Dead Woman’s Hollow. There was also a crime / horror movie (fiction) made about the location - Dead Woman's Hollow (2013)

Anyway, the witnesses most likely had a run-in with a Bigfoot, which have been reported throughout Michaux State Forest. But then again, I'm not going to discount the fact that bi-pedal canines have been seen in Cumberland County, and Michaux SF would be an excellent habitat for them. Yellow eyes are indicative of canine and / or feline. Lon