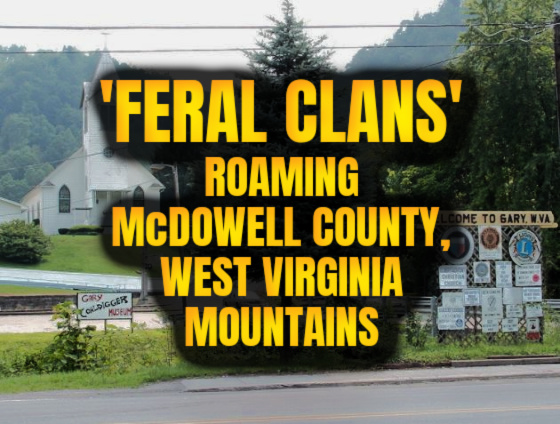 A woman from Gary, West Virginia describes her encounters with a clan of feral 'people' on her property. The descriptions are of dirty barefoot hairy mutated humans that are able to leap through trees.

“I live in West Virginia and have all my life. I don’t come from a rich family and I am not rich myself. I live in a small single-wide trailer with my 2 year old son outside of the town of Gary in McDowell County. My boyfriend is a truck driver and is only home every so often. I’m kind of used to being alone with my son here at night. My closest neighbor is 3 miles away and my trailer is back in the woods.

So, this just started last summer. I clean houses for a living and I was leaving the last house of the day and had just went to pick up my son from the babysitters and we headed back home. It was 8:00 exactly when we turned in the driveway. My driveway is a very long sand driveway surrounded by trees and the woods on both sides. I hadn’t even got to my house when I saw a man jump from one tree on the right side of the drive way to a tree to the left side of the drive way. I mean like 30 feet in the air. He just jumped liked how a monkey swings from trees. He did this in front of the car as I was still driving slow to get to the trailer. It’s bumpy sand on the driveway so I never go more then 10mph down it.

At that moment, I wasn't sure what I saw, but I did know it was a man. I saw its skin and it had some torn cloth on him too. Arms. Legs. All of that a man would have. Did not see its face. I hit my brakes. My son is still in the back seat almost asleep. I didn’t question what I saw or try to make sense of it because I know it was some creature. Yes, I was scared. My first thought was my son. I only stopped there in my driveway for a second and then I went ahead and sped up to go on and get down the driveway so I could get in the house with my son. I’m passing those trees to my left and I’m just a looking around to see if it’s there. I don’t see nothing. I just keep on going. It’s about dark but I can still see.

I see my trailer around the corner up ahead and I see movement. OK, so let me add here that it's not that uncommon for some deer or other animals to be around the trailer. That’s normal. But there were people up ahead and one of them was in my trash bag. I don’t have trash service way out here so I sometimes will sit a bag of trash on my porch and haul it myself to the dump. So a man was all in my trash. I get closer and these people hear my car and my headlights are lighting up the front area of my house. And I see like 4 of these things run off into the woods. I saw one of them real good. But it was his face that really got me scared.

That thing had dirt or mud all over his face and there was something wrong with his face because it didn’t look right to me. His eyes were way up on his forehead and it had this hump back. It had some dark pants on but no shirt and the chest and back had a lot of brown hair. His nipples were huge and dark and I could see it through the hair. He was barefoot. This was the one digging in my trash bag. He ran off too but he didn’t seem to be in such a rush as the other ones were to get back in the woods. I lost sight of them all and I waited before I went any farther because of my son. I didn’t have no gun or anything on me. So I was careful.

I sat in my car for 20 minutes running idle before I drove on up to the house. I grabbed my son and we ran inside and because of no cell signal down my driveway, I called my uncle once I got inside. My uncle said I was seeing sh*t but he came on out there an hour later and looked around. Lord I was so scared while me and my son sat here waiting for my uncle.

My uncle got here. He’s a big guy and had weapons on him. He investigated. He came back in the front door white as a ghost. He came in and said he had saw the devil in those woods and that we were getting in his truck with my son and we’re getting the Hell out of here. We never called the police or nothing. What were we going tell the police? That was last summer.

The winter came and nothing. Then just this past March, when my boyfriend was home, we hear scratching at 11 at night of the side of the trailer. A metal sound. He went outside to look but there wasn’t anything there. But he smelled an odor that he described as rotten pig feet. If you eat pig feet then you know what I mean. We smell bad things a lot and we see things moving in the trees. But now my boyfriend will be moving us to another state because of his job and we only have a few more weeks here, but there are some wild clans in the West Virginia mountains." T