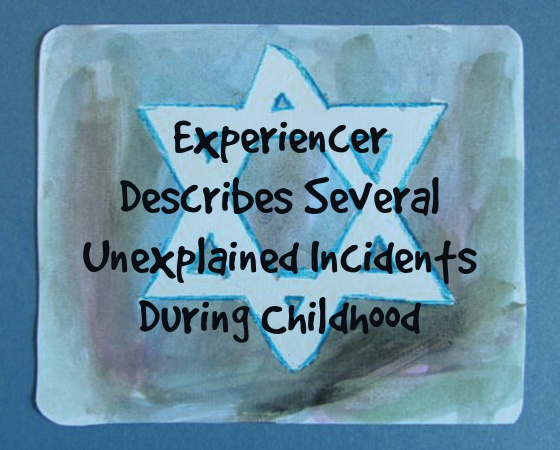 An experiencer recalls strange events that he witnessed while living in Kentucky. Mysterious designs, a possible Bigfoot sighting, and an encounter with a dark being.

"My mother and I, along with my older brother and my mom's husband at the time, moved to Kentucky. My mom met a man who convinced her to sell her house in Cincinnati, Ohio, her car, her houseboat, all bought and paid for. I was 6 years old at the time in 1994. It was summer I believe, although the next few years are splotchy at best in my memory. Many strange occurrences happened even after we left Kentucky and moved to Pensacola, Florida with my Aunt, but that's another story (although possibly related).

They decided to build a house with the money from selling all of her things. It was only her husband, and my brother, who had to have been just about 22 years old. We lived in this place with no electricity or running water for a while. The roof wasn't completed so there was just a tarp to keep out the rain. I vividly remember the outhouse that was up a steep hill just about 30 yards from the house, as well as taking baths in a metal basin before school with water that needed to be heated over a fire.

One day I was drawing a picture on the floor of my aunts' house with one of my cousins. It was simply a picture of the scenery, little hills, and badly drawn trees. I begin dotting the sky for stars when my cousin grabbed the pencil from me and said, 'No, this is how you draw a star," as he carefully draws two intersecting triangles to form a hexagram, or what is more commonly known as the Star of David. I only vaguely remember the subsequent events, but I remember exploring this very old barn from the 1930s, falling apart and blackened with mold and weathering.

The next few months I begin to draw the star on pieces of notebook paper, many, many times. I became for lack of better words, obsessed with it. I drew little star-shaped men with arms and legs and a face. I hid them under my bed, those countless sheets. It appeared that I did not want anyone to know I was drawing them. I was self-conscious about it for some reason.

Anyways, there's just so much to cover here. Although I don't know if the star has any relation to my 'visitation' or if I just imagined it all, connecting the star to a traumatic event is entirely possible. Here are the events as they happened.

There was a church that I vividly remember, but for the life of me cannot find anywhere on any map. It was a small rickety shack of a church, but I remember going to Sunday school there. They had a sermon once where I saw snakes in a tank by the pulpit. That was the last time I went there.

My family was over, putting up an above ground pool in the front yard when I had to pee, so I made the trek up the hill to the outhouse, where I stopped dead in my tracks. I remember the fear was so tangible. I grew cold and couldn't move out of panic. A large, and I mean very large black, what looked like a bear, but its fur was long and matted and stuck out here and there. It had its head inside the outhouse door, but its body, the shape of it at least, towered over the outhouse a good five to six feet. I did not scream, but did run back down the hill to tell my mom and brother about it. They did not believe me, but my brother went out into the woods later that day to look for any signs of black bears, but there was none.

We had two Doberman Pinchers which we kept in a cage behind the house. Venus and Shoki. Now, I remember both of these dogs. While Shoki was mild and calm most of the time, Venus was younger and barked at every little thing, regardless of what it was. My brother, mom, and myself were sitting in the living room. It was raining, a torrential downpour and we were worried that the tarp would cave in. The dogs were barking like usual, but then suddenly stopped. We hear screaming, like that of a dying woman, right outside of the front door. This undoubtedly was a mountain lion. If you've never heard one, do a quick YouTube search to understand how horrifying they sound. It began scratching furiously on the front door. We had electricity by this point and all the lights were on. I've talked to a number of wildlife experts and they pointed out that this behavior was very unusual as they normally stay away from humans.

My mom had a garden outside to the left of the house, near a disgusting pig pen that I abhorred. One very nice clear day, we were outside and it began to rain in a perfect square on the garden. No discernable connection. Just weird.

The final thing is the culmination of these events, and by far the most terrifying. My mom swears up and down that my bunk bed was haunted, or holding negative energy. I do not believe this. One night I was lying down to sleep. I had my little action figures, or did I? I think I might have been using my hands to pretend they were characters under the covers. I don't know if I fell asleep or if this happened right afterwards, but I remember seeing a black figure that I imagined in my youthful mind to be wearing a cloak, like the grim reaper standing still in the middle of my room. But when I say black, I don't mean the color. I mean pure darkness, so much that I could see it clearly in the dead of night with only the moon to illuminate anything. It was like what I would imagine a black hole to look like.

It said nothing, and never moved. I was terrified and unable to move. I've toyed around with the idea that it was sleep paralysis, and I believe if I even said this to my therapist she would agree. But regardless for the story's sake, I couldn't move, at all. Suddenly the covers are ripped off of me and I can see my still body lying there in pajamas.

The next thing I remember was waking up, walking into the living room where my mom was sitting on the edge of the couch. She immediately ran to me and put her hands on my shoulders as if she knew something had happened. I simply said to her, "It's okay mommy, I'm okay."

We moved shortly after that. But even after moving to Florida, I still had things that happening. I was first introduced to severe anxiety and depression, excessive eye blinking that comes and goes to this day. A few times my mom said that I would act like a banshee, flailing my arms and eyes rolled up in my head, speaking in what some would call 'tongues', but that only happened twice, once at home, and once in a church.

Sometimes I can hear whispers in my ears that are like thoughts, but more like indiscernible chattering that is somewhere between hearing and thinking. It's weird but only happens rarely now.

I have never to this day slept with the covers completely over me. I, to this day, have never again drawn the star and will stay away from it even if my life depended on it." D