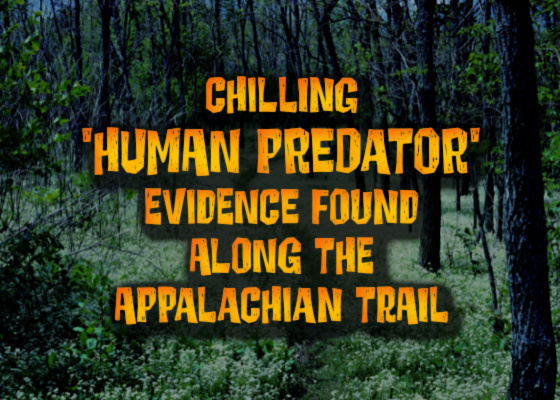 The son of a retired National Park ranger recalls an account told to him by his father. The details are chilling and coincide with some of the strange incidents along the Appalachian Trail.

"My dad is a retired park ranger (if that's what you call it). He worked for the National Park Service up until 3 years ago. His usual tasks involved taking people on tours along the Appalachian Trail in the Shenandoah National Park, maintaining the forestry and the wildlife habitats that lived there.

So anyway, this story goes back to the summer of 2003, when my dad and a colleague (we shall call him John) were sent out to try and locate an adult Elk, a male named Billy by the locals, who was usually very tame and was often found close to houses, but had not been seen for over a week (this was apparently very unusual for him). So my dad was dropped off along the trail, whilst John took the truck and drove further down (approximately 5 miles) in order to try and locate Billy. They had been searching all day for him and this was the last stop for the day as there was only a few hours of daylight left.

So as the story goes, my dad had been walking along the trail for a little over an hour when he heard a disturbance in the distance off to his left. He could hear the snapping of tree branches, so decided to follow where the noises were coming from, in the hopes that it could be Billy the Elk. As he got closer, he said he began to smell a foul odor, and instinctively knew that it was some sort of dead animal. He was right. Laying on the ground, in a small opening of trees was the carcass of a large elk. He could see by the tag on one of the ears that it was Billy. However, he was immediately shocked by the condition the animal was in.

Billy had been severely mutilated, his eyes and tongue had been gouged out, his throat torn out, and his stomach had been ripped open, so that the intestines were protruding onto the ground. He also noticed that little chunks of flesh had been bitten from the torso, and the entire front right leg was missing. He reasoned that the animal had been attacked by either a black bear or coyotes, as nothing else would tackle a fully grown adult elk, however this seemed strange because Elk were usually too big for even apex predators to try to take down. But he thought that maybe a hungry pack of coyotes might, if they were starving.

What disturbed him further was the way in which the animal had been mutilated after death, (my dad made a point of saying he had never witnessed anything quite like it) and that it was very unusual for predators to mutilate a corpse in such a way. Feeling unnerved by this discovery, my dad radioed John and told him he had located the animal, before giving him his approximate location. John had told him that he had wandered off the beaten track and that it would take him around an hour to get back to where the truck was parked and drive back to his location. So my dad was told to wait where he was until John got to him. It was almost dark at this point and my dad remembered beginning to feel very unsettled. He had a flashlight with him, and bear spray, but noted that he still felt very vulnerable alone in the forest.

After around 15 minutes or so, he heard the same noises as he had done earlier, much closer now as he was off the trail. He would hear footsteps and the occasional growl of something hidden within the thick bushes straight ahead of him. He said that every so often he could hear slow heavy breathing and the snapping of branches as whatever it was paced the forest floor. He began to get the feeling that he was being watched, and worried that the coyotes, or perhaps even a bear, was now stalking him. He said that every so often he would wave his flashlight in the direction of the disturbance and yell in order to try and scare off whatever it was that was watching him. However, the noises still persisted and this seemed to aggravate the creature. Luckily the animal never came any closer or revealed itself to him, simply pacing around in the darkness and letting out the occasional growl.

Just over an hour later, the truck pulled up along the trail and my dad could see to his relief that John was now following the flashlight to where my dad now stood. The arrival of another person must have spooked the harasser, as he noticed hearing the crunching of leaves now moving quickly away from them. He told John what had happened, and the man reasoned that it may have been a bear, and that they probably shouldn't hang around. Together they wrapped the corpse in a cloth, and managed to haul it into the back of the truck.

My dad said that just as they were getting ready to leave, curiosity came over him and he decided to walk over to where the sounds had been coming from only moments before. John got out as well and the two of them scoured the area. Behind a fallen log, they found the half chewed leg of the dead elk, along with a number of discarded candy and chocolate bar wrappers and a small length of rope. Further back into the tree line they found a pair of nitrile gloves covered in blood and human shoe prints leading away from them. They also discovered the remnants of a small fire and a comic book.

This had terrified my dad, the realization that it had been a person that had mutilated the elk, that had been watching him from the bushes and growling, so much so that he and John had agreed never to mention the encounter to anyone. My dad has told me that not a day goes by that he doesn't think about what he saw that day. He still struggles to comprehend what the person was doing out there in the wilderness in the middle of nowhere, how they had managed to kill the elk, and what their intentions were towards my dad.

We relocated from the area in 2005 and now reside near Richmond, VA. My dad hasn't been back since and has said that he will never walk the Appalachian trail again. I can't blame him to be honest. Anyway, thankyou for listening to my story." BA

NOTE: I have read and heard several first-hand accounts of bizarre sightings and unexplained attacks along the Appalachian Trail, especially in the George Washington National Forest and the Shenandoah National Park in Virginia. There has been talk of wild men and other humanoids (including aggressive Bigfoot & cryptid canines) for decades. Lon