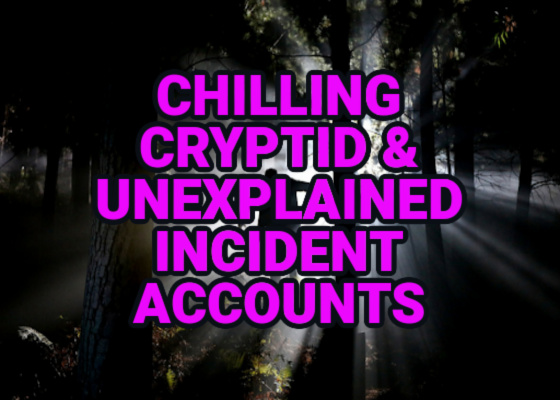 I recently came across the following bizarre accounts:

"A year has passed since that night in New Mexico. It keeps me up almost every night and I can't keep it to myself anymore. For some context, I go by firm logic and usually have an explanation for everything. But this night still seems to find its way to me.

I was on a four-day trip from New Jersey to Arizona stopping whenever we needed sleep. I was with my friend at the time and her mother. The last stop before we arrived was the most chilling moment of my years. The air was hot and we had the windows down at a rest stop in the middle of the desert. My friend was next to me. I was seconds away from sleep when I heard it. A screech, more of a scream, mixed with a growl and howl coming from the desert. This was paired with a rush of force, fast enough to shake the car and moving van next to us. Panic set in as I rolled the windows up and started the car. My friend looked at me in fear.

Right afterwards I left the car, with a knife tucked in my waist like it was actually going to do something, and a high power flashlight bright enough to light up the desert behind us. I looked out for the longest time and saw nothing. There was no movement, and no noise was to be heard. Everything was just quiet. I walked around the rest stop and among the four or five other cars everyone had the same look. A look of fear and uncertainty.

I know I didn't see anything, but that call is like nothing any animal could make and I haven't stopped thinking about it. Even now it sends me chills and keeps me up. I'm not writing this for an explanation or even someone's reasoning for it. I've tried to find reason in it and can't. I'm writing this to put it out there and almost vocalize it. There is something out there in the desert and it is not happy." VB

"This happened to me a couple of years ago. I live in rural south Texas. My house has a sunroom in front of our living room with 2 windows. One night, while family spent the night, I'm asleep on a couch with my facing the left hand window. The sunroom has a glass sliding door and I left it locked.

I woke up at around 3-4 AM, opened my eyes with something staring in at me. I stayed still for a solid minute which felt like an eternity. I ran as fast as I could to my family room where my grandpa was sleeping to tell him there was someone watching me sleep. He walked with me back into the living room and it was gone. I didn't see it well as it appeared as a silhouette, but I knew it was alive as it was semi-swaying as it stood there." SR

"This happened when I was around 15. I’m 19 now. I’m still thinking about this but until this day I never knew what it was and I was hoping to get some answers.

So it’s around 3:30 AM in Greenville, North Carolina. I live in a little neighborhood in a rural area surrounded by woods, so wildlife was common. I hear my dog barking from upstairs, so I go up and I see her staring out the window. I don’t see anything so I go outside to the front porch.

In my yard was a mangey looking coyote/fox? It was too dark to see clearly. The only way I could tell was the street lights. It had no hair on its tail and it was very thin. It looked sick. It had hair missing from its face.

I yell at it to get going, because I’m tired and my dogs are yapping. It just doesn’t leave. It lingers around for a while and, being 15 and stupid, I decide to scare it off by getting closer to it. Then the scariest shit happens. It stands up on its hind legs and its legs were unnaturally long and deer-like. They looked like they were bent backwards. It occurred to me that wasn’t exactly normal. Thinking about it now it looked more deer-like when it stood up, but looked canine like on all fours. It was as if it changed forms. It sprints off on its hind legs like a human, taking huge steps and runs off near the train tracks by my house. It stopped sprinting midway under the street light to look at me and I got the f*ck inside. Its eyes stopped glowing when it stood up too, and its ears changed as well. Looked more deer like as well, but I swear it was a canine with big fox-like ears. But then, it was almond shaped like a deer. Anyway, it freaked me the hell out and I can’t find any information on what it might be." JB

"This was just 2 years ago in western Washington in the Olympic mountain range. Myself and 3 friends where walking to my house from one of there's. It's just past dusk, but we can still see just fine. We are at the end of my driveway when we all see the 'thing.' I've heard about 'Not Deer' before and the only way I can describe this thing is not a cougar. I'm an avid hunter and I've been up close to cougars before and this was not one. The eyes where wrong. The back leg joints where too close to the hip joints causing an awkward walk.

We all stared for a few moments after we shined a cheap flashlight at it, and it stared back. Its eyes did not reflect like a cat's would. I felt like it was sizing us up to see if it could fight us. After just a few seconds it ran off moving its front legs out and forward and dragging along its awkward back legs. Any idea what the hell I saw?" JT

"I had an extremely disconcerting experience late in the winter last year. I, for context, live in an extremely isolated community in British Columbia. The forest stretches forever around us and the next closest town is hours away.

It was late December and I was out in the woods with my mother and telescope to try to catch a glimpse of Jupiter and Saturn in conjunction in the sky. The sun had just set, the snow was deep. Then we started to hear the screaming. It was this woman’s voice just screaming for help. I couldn’t even tell if it was human or animal at first but. Eventually, I could make out the words “help me,” but it was all so... animalistic.

We called the police and I went to go look for her and got totally lost. The snow was so deep and the trail seemed to just disappear. I was hearing her voice and yelling that help was coming and to keep shouting so that I could find her. I know the area and I know these trails but everything just melted away and I felt as though I was almost being watched. Then things get really weird.

I‘m getting closer, hear another voice coming from that spot. I see a flash of a fox in my peripheral vision, turn a corner and suddenly stop. This massive red fox is standing there, staring right into my soul. I swear its eyes were almost human. The snow was too deep to get around it, and it wouldn’t move. At all. I screamed at it and threw snow and sticks but it just watched me. It wouldn’t let me pass. I’ve seen so many foxes here, but I swear to God something was different about this one, in a weird protective way. It was like it knew me and I knew it.

Then the 911 operator called me so I could guide the police to the scene, since we were pretty far in the bush. I was totally lost and confused. I’m trying to find my way back and then see the fox again. It watches me and then slips back away into the forest. Suddenly, I see these fox tracks in the snow and, following them, I pop out of the brush within 20 meters of two armed policed officers. The police and fire department searched into the night and found nothing.

In the spring, two or three kilometres from the site, (in the opposite direction of where I heard the screams), they found what was left of a woman’s body. What the f*ck did I almost run into that night, and what was protecting me?" SB