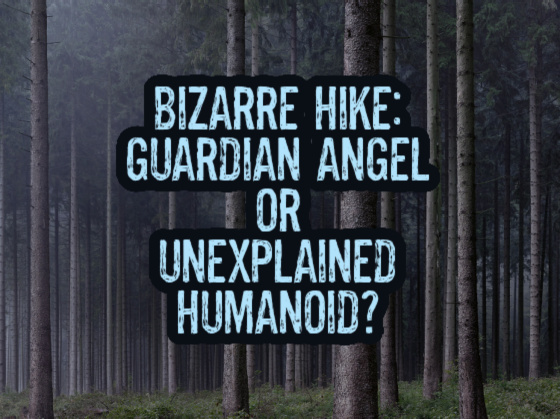 A man had several unexplained incidents while hiking in a German forest. Shaken by the events, he eventually encounters a man with bright green eyes. Was this a Guardian Angel or was it related to the grey humanoid?

"I had this encounter about a year ago, but I started thinking about it quite a bit recently. I also wanted to add that while I don't fully dismiss the paranormal I don't really believe in ghosts, cryptids and such. This encounter didn't really change my mind about that.

I had decided to go on a solo hiking trip for about 2 weeks (this would have been my second time doing something like this). The first 2 days of the hike were very average and relaxing, just a simple hike, but at night things got a little bit weird. I went to sleep at around 21:00 or 22:00 and nothing much happened until around 02:00. I remember smelling a faint stench of rotting meat, it wasn't anything too crazy, but it was weird enough to somewhat wake me up. I tried to ignore it and go back to sleep. But then I started to notice that something was moving around my tent. I did think that because of the smell and the sounds that it could be some carnivorous animal that maybe stank of rotting meat for whatever reason. But since I was still half asleep I wanted to make sure it's not a bear or something so I opened my eyes to check around.

Now just to note that during that night the moon was quite bright so it was possible to see quite well outside, so when I opened my eyes I could see a vague, lanky humanoid shadow outside my tent. I didn't feel like I was in danger or anything. I did have a side arm with me so even if it was some creep I didn't really feel threatened while holding a gun. After about a minute the guy left (and the smell also disappeared), but since it was a very creepy encounter I stayed awake for about an hour and after nothing else happened I went back to bed.

The next day I had that weird feeling of being watched by something dangerous, but I don't know if it was because I was confident in my ability to protect myself or whatever. I didn't feel like I was in any danger at all, I just felt creeped out. I didn't really enjoy that day all that much to be fully honest and because of that I set up camp a lot faster then I usually did. I didn't go to bed at my normal time since I didn't want someone sneaking up on me again.

At around 01:00 I could smell that weird smell again, so I gripped my gun a little bit tighter and tried to find the guy. But instead all I saw were just a pair of yellow-ish eyes in the distance. I stared at them for about 5 minutes and then they just vanished together with the smell. I didn't feel like I was being watched anymore during that night so after an hour I did decide to go to sleep.

The next day the feeling of being watched was back, but again, I didn't feel as though I was in any danger at all. I decided that even though I felt that way I would still rather cut this trip short instead of actually getting into a situation where I am in danger so I started making my way back (though through a more round about path). Nothing really happened that night.

The next day I suddenly could smell that rotten stench. It wasn't any stronger then before, but since I was in a decently large clearing at that time and didn't see anyone or anything around me. I did panic a little bit and started walking with a faster pace. I'm not exactly sure on how long I walked after that, but around mid-day the stench got stronger. Now I think that it's important to note that I don't have the best vision and I should wear glasses, but I don't most of the time. So when I looked around me and saw a gray humanoid figure quite far away to my left I did panic, but by the time I put my glasses on it was gone.

After that I really didn't feel like staying there for much longer so I started doing a slow run to get out of there faster. I had run quite a distance while feeling something following me, but then I ran into this strangely peaceful clearing where both the stench and the feeling of being watched stopped. It was a relatively small clearing with a few small boulders around, but the strange thing was that a man who was in his late 40's or maybe even early 50's was sitting on one of the boulders. He was wearing very plain "dad" clothes, definitely not something you would be wearing while hiking in the middle of nowhere. Plus he had no gear anywhere near him. But the thing that I noticed first about that guy was his strangely "bright" green eyes. They weren't bright in the literal sense, but more like the kind of brightness you would see in the eyes of a child.

After running for so long I was exhausted and the man noticed that and told me to sit down on one of the boulders and rest. I didn't even think about it and sat down. We talked for a while, mostly about hiking and nature and while talking he had this very friendly smile that made me feel at ease. When I had rested he offered to help me build my campsite in the clearing. He was very good at starting a fire. We shared a cup of tea and he told me that it was very nice talking to me, but he has to go now. He didn't really say why or where he has to go, but he just stood up and left. That night I didn't hear any noises other than a few birds and crickets.

When I woke up the next day I felt very refreshed. I packed up and started to continue along the trail, I didn't feel like I was being watched or smelled that stench at all during the rest of my hike.

This was the first time I've told the story in full detail. I usually say that some animal or whatever was following me since that way people would actually believe me, but I decided to actually write exactly what happened." VO