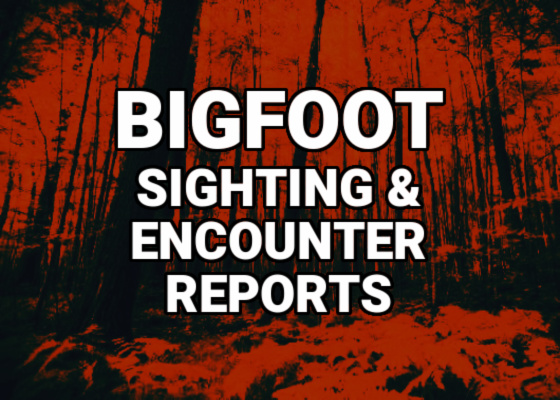 I recently received these accounts:

"I'm from Chilliwack, British Columbia and grew up spending a lot of my summer at Hicks Lake and the surrounding area. A friend and I saw something on the far side of Hicks Lake when we were kids, maybe 12-14 years old back in the early to mid-90s.

We used to catch frogs and snakes there all day and had paddled an old surfboard across the lake after stopping at the small island in the middle. We called it Snake Island despite never seeing a snake on it. Once on the other side, we walked into the forest to see what we could find as we hadn't been there before.

After a few minutes, we both saw a very tall, brown, and apparently, hair covered 'something' walking perpendicular to us on two legs, maybe thirty to fifty feet away. We were just kids but knew to leave right away; we said nothing to each other, turned around silently, and scampered back to the surfboard. Neither of us ever spoke of it. Yes, we were just kids, and bears walk on two feet sometimes, of course, and there certainly could have been another human over there dressed in brown. But damn, I remember it like it was yesterday and that was one-hundred-percent no bear or human.

I didn't tell anyone this story until only a few years ago, roughly twenty-seven-years later. That I can understand, but I'll never know why we didn't talk about it at the time. We got back on that surfboard and paddled back to the opposite side of the lake in near silence, and I don't think we ever mentioned it to our parents or friends. We didn't even talk about not talking about it, either. Pretty strange for two kids who never shut up about anything." ML

"Back in 1975 I was in the military stationed Fort Polk, Louisiana. On weekends my partner and I would go stay with my girlfriend and her family outside of Camden, Arkansas, deep in the woods. Their house was several miles from the next house.

One weekend, around 9 PM, we were all watching TV in the living room. Her grandmother was washing dishes in the kitchen. All the sudden she screams like she's being murdered. We all ran into the kitchen, thinking she fell or something. She was just sitting on the floor, white-faced and crying frantically, yelling she 'saw it again staring at her in the window.' She said it was like a huge man's face with wild hair around its head, with red glowing eyes looking in at her.

We all grabbed guns and ran outside, split up looking for whatever it was. There were 6 of us. I was with my girlfriend's dad. We saw something in the woods. It was huge!! All we saw was a large dark figure running and it let out a yell that to this day I never heard since and I live in the swamps of Louisiana. It started like a man howling and ended like a damn elephant!!. Gives me the heebie-geebies to this day.

I went back and looked at the kitchen window from outside. The window was 10 foot off the ground so whatever it was had to be over 10 foot tall." SK

"I live in southern Missouri, way out in the boonies. One night I took our dog out before bed, about 100 yards from my backdoor. I soon noticed a strong odor of rotten eggs lingering through the woods. I didn't think much of it. Then all of a sudden my dog, who I had on a leash, almost drug me across the yard trying to get to the backdoor. Now, keep in mind, my dog is a 100 lb. Pitbull and not afraid of anything. She only barks when she see's or hear something out of the ordinary. But this time she sensed something that terrified her so bad. No bark, No growl. Thought that's odd? Took off running.

Now, I get her back inside. She is yelping and carrying on. I go and stand in my doorway and I hear a knocking sound sounds like a 2x4 being struck against a tree and then I hear this funky growl/howl I have never heard before. Then I hear the sound of something running through the woods, away from me. Never will forget it. Didn't really believe in Bigfoot. But after that, it made me a believer." JS

“In North Florida, in my son's back yard, I found several foot prints, 29 inches long and they sink in the ground 2 inches deep. I slept a few nights in a tent there and it shakes the ground when it walks and it smells like a landfill. The dogs go crazy when it's there. I also found foot prints just outside my granddaughter's bedroom window. My 4-year-old granddaughter said the monster with big teeth growled at her and she hid beside the bed on the floor.” GW

“I had an encounter with a Bigfoot in Slatyfork, WV while snowshoe hare hunting. When it started screaming and whooping my Beagles quit the Snowshoe they was running immediately. They ran back to me scared with their tails tucked between their legs. They never made a sound and my dogs reaction scared me more than the screams. They then started down the path back to truck.

We had over a 3 mile hike to get back to the truck and when we made it, I could still hear the screams clearly. I'll never forget that encounter! That was the only encounter I've had on Cheat Mountain and I hunt Snowshoe Hares every year, but that's during the winter. When I had my encounter ,it was during the summer during the training season for Snowshoe's! I have heard tree knocks 3 different times along the Gauley River in Webster County where I live!” Name withheld