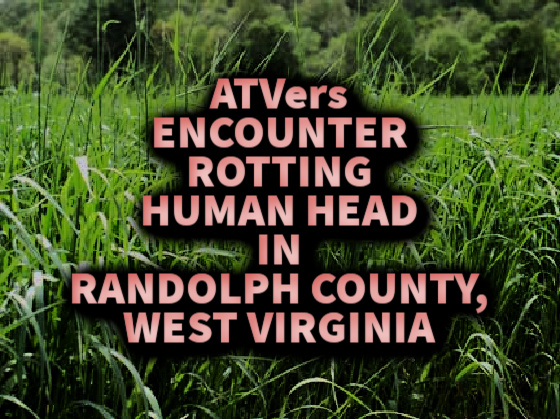 A West Virginia witness recalls ATV riding with his father as a youngster. One day, they encounter an unimaginable sight...a rotting human head mounted on top of a post.

"As a child, my father would take me four-wheeling out in the Mill Creek area (Randolph County, West Virginia). Once, I recall we were miles out on this mountain. We drove past this weird little shed. It struck me as odd because there weren't any buildings for miles in any direction, but here stood this weathered white shed. There was a chain wrapped all the way around it and secured with several padlocks in addition to what looked like a deadbolt on the door. I felt instantly nervous, like we were somewhere that we shouldn't be.

The trees gave way to tall grass and a large circular clearing where the shed sat. On one side of the clearing was a gentle hill that sloped back up toward the tree line. The grass was SO long and green that I put my hands out the side and let it tickle my palms as we rode. The ground beneath that tall grass was soft mud under about two inches of water and as soon as we hit it we had to slow down to avoid getting stuck up in the mud. A spider fell into my leg, then got stuck in the hem of my pant leg, so naturally I freaked out and went to brush it off.

When I sat up I glanced by my father's line of sight up that hill to our right where there stood a wooden post. On the post was a head. I remember immediately guessing that it was an animal head because some hunter had probably dressed an animal out there. I was only 12 or 13. As we rode closer the face looked grotesquely human and I became upset. My dad looked straight ahead the rest of the way, and where my hands braced his shoulders I could feel him tense. My eyes were glued to this thing, trying to find my way to a rational conclusion all the while as we got closer and rode past (around 50 or fewer yards away, I'd guess but I'm terrible at estimating distances).

To this day, I don't think I'll ever forget that head. The slack in the jaw and the dark gorey bits that hung from the neck. The skin was browning from decay and exposure...and birds and insects had done a bit of work already. The creepiest part was the hair. Long, straight, and pitch black. It was tangled into the tall grass around it, knotted into itself with matted protrusions poking out.

My dad later insisted that I not tell my mother, then assured me that it was a Halloween mask and someone playing a sick joke. And maybe it was. The rowdier country people around there were no strangers to partying out in the woods. But usually that meant tires thrown around, beer bottles, cans, and cases left about and a lot of spent brass. This would have been a really shitty location for hanging out, and so far out of the way that it seems unlikely someone would place it there as a prank. It's just that something felt so wrong while I was there.

We never went back to that place, but more than a decade later I can still see that weird little shed and that awful head on that hill." TR