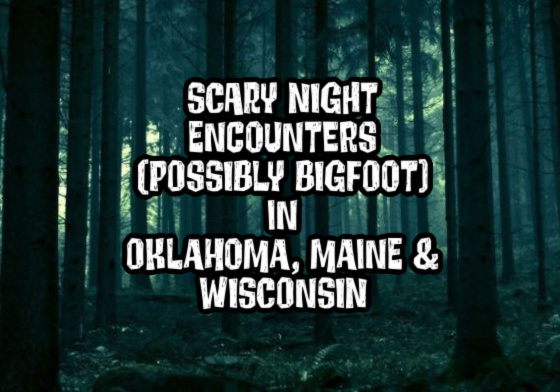 3 possible Bigfoot encounters reported in Oklahoma, Maine and Wisconsin. Very scary incidents that would make you think twice about going into the woods at night.

"It's late December and there's still ice on the ground in the Kiamichi Mountains of southeastern Oklahoma. A buddy and I decided we wanted to test our new sleeping bags out with our hammocks. We're pretty avid campers. We set off on a four-wheeler trail in the middle of nowhere until we get to this nice little bend in a river with perfect trees to hammock off of. Keep in my that the temperature is probably still in the 20s and we decided to go to the middle of nowhere.

Anyways, the first night is dead silent all night and we fall asleep around midnight. Then we start to hear loud tree knocks and strange vocalizations that wake us up from a dead sleep around 3 am in the morning. This vocalization almost sounds like a pissed off gorilla. We immediately jump out of our hammocks and leave all of our stuff and hightail it back on our four-wheelers in the middle of the night.

You'd think we wouldn't ever go back there, right? Wrong. Instead we decide to "man up" and go back to find out what it was and stick it out another night. Bad decision.

After a few wood knocks and rustling in the woods for the night we uneasily drifted to sleep in our hammocks once again only to be waken a second time. This time by the sound of large rocks, if not small boulders, being hurled into the river beside us. The loud crash of large rocks in the water in the middle of the night woke me up better than coffee. Needless to say we got out of there quick and returned the next day to retrieve our stuff. Haven't been in the woods at night since. And this wasn't my first experience with what I believe to be is Bigfoot." Anonymous

"I live in Iowa but we have a family cabin in Wisconsin on the shore of Lake Michigan. It's located a few miles north of Sturgeon Bay. There are other houses nearby but it's a heavy wooded area.

Last year my wife, oldest daughter and I went up to open the cabin for the year. Most nights we light a fire and sit out by it until around 1 am or a bit later. One of those nights we were out by the fire that was kind of big due to the cold. Me and the wife heard a howl off in the distance that didn't sound like dog or coyote. We shrugged it off until we heard it again about 10 or 20 minutes later, but a lot closer. I went inside to grab my gun in case it was a wild dog or coyote.

About 10 minutes after that we heard a loud knock just across the creek over by my truck. We were a little freaked out but we didn't want to leave the fire. About 5 minutes after that we heard something splashing in the creek. Then a tree got pushed over just behind us and to the left of the cabin towards the woodpile and the lake. The tree was around 2 1/2 or 3 foot around, no wind that night and it was a live tree. We all decided to go inside and go to bed with my gun next to the bed.

I looked for prints in the morning, but couldn't find anything defined. Some moss was tore up and pushed down in spots. The creek is covered in lots of river rock so there isn't much mud by the creek. That's my story of a possible bigfoot." YB

"I used to live in western Maine in a town called Phillips. I was camping on Lake Oquossoc about 3 years ago, as we were on guided trip. The guides decided to have us practice our search and rescue skills. It took us about 4 hours to find the 2 guides. There was 8 total people in the search party and we were split into 3 groups to cover ground.

One of the parties said they heard something over the radio. Then they said get here fast. We were about a mile away from them but I have never run so fast in the thick dark woods to help someone like that before. We arrived and they said they heard a loud grunt and tree branches snap and there was a terrible smell. Everyone was shaken so badly we waited until morning to discuss it. No sighting just heard something and smelled it, but they were freaked out." DC